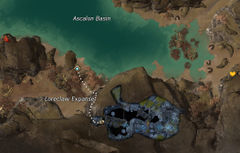 Loreclaw Expanse is a jumping puzzle located in the area of the same name in Plains of Ashford.

Loreclaw Waypoint — to the cliffs. Look for a low point in the rocks, where a ledge slopes up to the south. Climb up it and head east into the cave to reach the puzzle.

Alternatively, head east from the waypoint into the water, and look for an underwater tunnel in the cliffs on the south shore. This path involves more jumping overall, but can allow you to skip the first two traps.