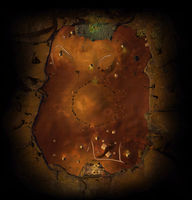 Come explore the place where his Royal Madness trains his army! Join a team, and compete to grow an army of your own! All in good fun. Would you care to participate?

Reaper's Rumble is a structured PvP MOBA-style map located in the Mad King's Realm that players can access during Halloween. Each team must protect three mausoleums that spawn skeletons and destroy the opposing mausoleums.

Stealth (Reaper's Rumble) for ambushes and ganks. The objective of the match is to destroy all three opposing team's Mausoleums. Each mausoleum is defended by four skeletons and has a farmer that will periodically spawn three skeletons that move to attack the opposing team's mausoleums (focusing on the one that is directly across from their spawn point before moving towards the other ones). Defending skeletons have more powerful skills than assaulting skeletons. If a farmer is killed, players may revive him, while the defending skeletons cannot be revived.

. Players can carry the pumpkins to the mausoleum and throw it inside to spawn four assaulting skeletons (just like farmers) at their mausoleums.

Pumpkins are located along the halfway line between the red and blue bases. The sides of the map also have cornfields that grant stealth to players walking through them. This stealth is broken upon leaving the cornfield, attacking an enemy, or being struck by enemy players' fifth skill Aimed Shot. The only indication of a player's presence is the rustling of the corn when players walk through.

Once a mausoleum is destroyed, the associated NPCs will disappear and players cannot spawn skeletons there using pumpkins.