We at ArenaNet were saddened to learn of the passing of Wynthyst, a vital member of the Guild Wars community.

Wynthyst was an active member of the wikis, where she played an active role as contributor and then administrator. She was passionate about wikis and her passion was contagious. Wynthyst interacted a lot with ArenaNet on the Guild Wars wiki and her work over the years was recognized with the creation of an NPC in the Zaishen Menagerie who represented her love of animals (birds in particular). She continued her work on the Guild Wars 2 wiki, always with the same unstoppable energy and cheerfulness.

After a while, she decided to level up her dedication to wikis by taking up an offer to work with Curse.com on their official wikis. As busy as she was, Wynthyst continued to talk and offer advice from time to time to folks in the Guild Wars and Guild Wars 2 wiki communities. In the words of the Gamepedia team , "She was an irreplaceable part of our team and community and will be missed immensely."

In memory of Wynthyst, ArenaNet built a new grave in the Stronghold of Ebonhawke cemetery, where a drakehound and a tamable juvenile lynx stand respectfully nearby. 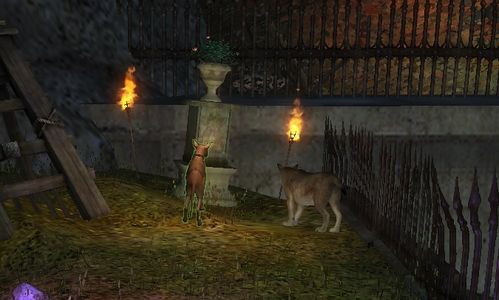 Tireless scribe and friend to animals

She left her mark on Tyria

and is now at peace in the Mists

Feel free to leave a few words in the memory of Wynthyst. Whether memories or thoughts, please be respectful and make sure to leave your name, whenever possible and appropriate. Thank you.

We'd play together often. I remember raging a lot when she'd charge forward Rurik-style while I hung back trying to pull and we'd all wipe. I remember her getting her first Tormented weapon, a scythe she was very proud of. I'd probably never have gotten through DoA, UW, or FoW, or finished vanquishing without her help. I remember her being quite happy when I started helping out the GW1 wiki, with the new Wintersday events connected with EotN.
I'd see her less after that, as she devoted time more to the other game she was running the wiki for. I hoped she'd return with the release of GW2, but that was not to be. Tyria is a lonely place without her. SarielV

My only regret was that it took me this long to write something to you. --Neil •