From Guild Wars 2 Wiki
Jump to navigationJump to search
Spoiler alert: The following text contains spoilers relating to Ghosts of Ascalon and the personal story. 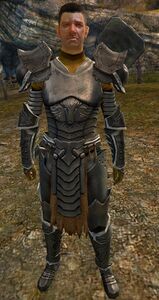 My forefathers were the kings of Ascalon, and I'll be damned if I let those renegades destroy their last legacy!

Wade Samuelsson is the Duke of Ebonhawke, Commander of Ascalon, and leader of the Ebon Vanguard who is an avid supporter of the Ebonhawke Treaty between humans and charr. His forefathers were the kings of Ascalon.[1]

Wade Samuelsson's forefathers were the kings of Ascalon.[1] He lived as a farmer in the Stronghold of Ebonhawke. Wade joined the Ebon Vanguard to make sure that Ascalonian farmlands would be safe from the charr High Legions that had taken over most of Ascalon. He turned out to have knack for giving orders and was eventually promoted to captain. As time passed, he became the Commander of Ascalon and leader of the Ebon Vanguard, successfully defending Ebonhawke from the besieging charr during the human-charr conflict. He ruled the city as the Duke of Ebonhawke.

In 1324 AE, Wade was informed that Kranxx, an asura tactician from the Vigil who had been looking after the city's asura gate, had brought a charr test subject to Ebonhawke ostensibly for testing new ways to kill charr with the commander's permission.[2] However, Kranxx had lied about informing the commander about the experiment as the asura was actually following General Almorra Soulkeeper's orders to help Dougal Keane's group, which included the charr "prisoner" Ember Doomforge, to reach Ascalon City Ruins and discreetly retrieve the Claw of the Khan-Ur for planned truce negotiations between peace-supporting humans and charr factions. The group could not reveal the true purpose of their mission out of fear that any anti-truce factions from either side tried to stop them from completing their mission. Despite the secrecy, the leaders of the truce factions had managed to influence decision-making on both sides so that the siege had been quiet for a few months with no assault from the charr lines and no patrols from Ebonhawke although many soldiers expected the sudden calm to precede a large charr assault.[3]

To keep the Ebon Vanguard distracted and allow him and Dougal's group an easier time to sneak out of the city, Kranxx set up an explosion in his shop, which drew the Vanguard away from the group's destination. Upon hearing his officer's report about Kranxx's claim, Wade realizing that the asura had acted without his permission and had helped the charr prisoner escape. In response, the commander sent his soldiers to search for the fugitives. He would eventually learn that Dougal's group had killed a Vanguard patrol chasing after them and successfully escaped from the city via the sewers.

Dougal's team was ultimately successful in retrieving the Claw of the Khan-Ur for Almorra and Queen Jennah, setting the stage for the negotiations for the truce that would be known as the Ebonhawke Treaty. While Wade was uncertain if the truce factions could find enough consensus to get the treaty signed, he avidly supported the treaty as he was tired of killing and wanted to focus on making something grow again.[1]

As the talks led to a temporary armistice between the charr and humans, rogue groups from both sides refused to stop fighting and formed the charr Renegades and the human Separatists, respectively. Wade had the Vanguard collaborate with their new charr allies and battle both insurgent factions to ensure continued truce negotiations.

In 1325, the Vigil got further involved in the Ebonhawke Treaty as the Renegades were threatening negotiations between Kryta and the Iron Legion. Warmaster Forgal Kernsson and a recent Vigil recruit arrived in Ebonhawke in state of battle. Renegades had smuggled in explosives to blow up the outer walls. This was successfully prevented, but their forces were attacking the city. The invasion was beaten back after defeating Gram Skullsplitter in the central square of Ebonhawke.

Wade told the Vigil troops that the Renegades were getting bolder, because they had a new commander Ajax Anvilburn. The Renegade commander had set camp nearby the city, but the Ebon Vanguard could not spare troops at the moment as they were busy guarding the treaty location. The Vigil promised to take a look at the camp.

Hard to imagine this farm was the site of a bloody battle two hundred years ago. We still find bones and bits of weaponry when we dig for crops each year.

Dug up a blackened charr skull. That was more unsettling than anything. A friend of mine found a rusty shield. Not worth anything. Just a bit of history, I suppose.

So, what do you do out here, when you're not digging up relics?

You seem casual for a military officer.

I wasn't born to be a warrior. I'm just a farmer. I joined the Vanguard to make sure our farmlands would be safe. Turned out I had a knack for giving orders. Before I know it, I'm the captain.

What will you do now after the treaty gets signed?

If the treaty gets signed. Farming has taught me that nothing's certain until harvest. But if it happens, I'll gladly hang up my sword. Tired of killing. I just want to make something grow again.

Nice to meet you. Good-bye.

Honor the past.
May the Gods protect you.
May you find the path home.