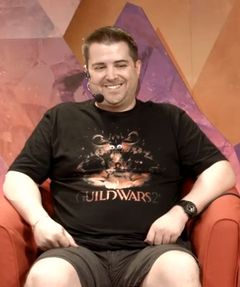 Matthew Medina is a content designer at ArenaNet. He has been at ArenaNet since 2003, and prior to that he worked at Electronic Arts Seattle (twice) and Cavedog. Matthew started his career as a QA Tester, lingered in the art department for 17 years, and is now wading out into the murky depths of game design. In his spare time, he enjoys parenting, debating apologetics, studying cosmology and evolutionary biology and writing science fiction. He is an avowed barefooter.

Matthew Medina was a Story Design Team Lead for Guild Wars 2: Path of Fire. He left ArenaNet in 2019,[1] but returned to ArenaNet in March 2020 as a Senior Content Designer.[2]