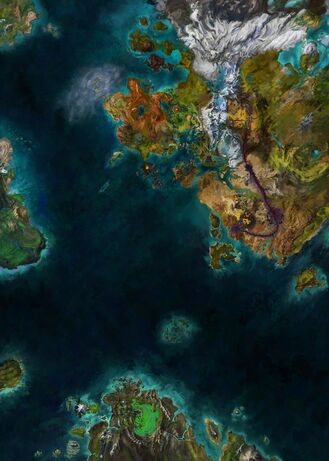 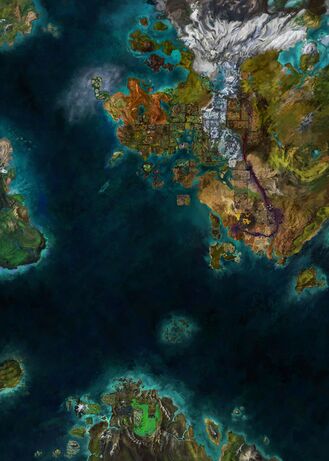 This article is about the user interface element. For the explorable locations in the world, see Zone.

The map (M) is the full-screen user interface element used to orient players and to enable instant travel using waypoints. The map shows a character-centered overhead view, presenting general information and markers that indicate nearby locations, events, and the character's most recent travel path. Characters can continue to move while the map is open.

The compass shares much of the same information as the map as part of the heads-up display. Players can communicate with party members by drawing on the map or the compass (Hold SHIFT+Right-click), or display a red 'alert' marker (SHIFT+Left-click); you can also add your own personal markers (ALT+Left-click, which can be removed by a further Left-click on them). Commanders can place additional markers.

Each zone has its own set of waypoints, hero challenges, vistas, renown hearts and points of interest. Hovering the mouse pointer over a zone's name will display a popup with your completition track for this zone. If the player successfully discovers all of them in a zone, they are rewarded with a map completion bonus, giving them an item gift (usually a Transmutation Charge [or, rarely, a Black Lion Key]), a number of experience points, a bonus in coins (not given to players for completing major cities' maps), two random Masterwork / Rare / Exotic items, and 40 of a useful, zone-level appropriate, crafting material. When the player has completely explored all of the zones, they are awarded with 2 Gifts of Exploration, an item required for the creation of a legendary weapon.

The legends at the top left corner show the remaining points for world completion and completion of the current map. Moving the mouse pointer over each entry in the legend will make any revealed point or scout pointing to not yet revealed renown hearts flash on the map, making them much easier to find. Some points do not appear unless the map is zoomed in enough, so the map must be zoomed in enough for those to be highlighted.

When the map is up on screen, the player cannot toggle the user interface (HUD) with CTRL+SHIFT+H. When the display (HUD) is hidden, the ability to double-click waypoints on the map is disabled.

When you explore the world of Tyria, the map will show you various information in the form of map icons.

Note: Certain map icons are hidden until the level requirement is reached. Once unlocked, they will be visible to all characters on the account regardless of level. See Level rewards.

The compass that appears on the map to aid in finding certain areas.

The following map icons show your progress towards map completion. Icons on the left indicate how many objectives you have completed in the zone you are currently in, and in the world. These are the only map icons that appear when outside a zone.

Major cities usually offer every service available in the game, except for scouting of course. Settlements and outposts, which can be found all across the world, may offer some but usually not all services. Certain icons (such as

) do not appear before a character reaches an appropriate level.

The services listed here are NPC services which are related to guilds. Some guild services (Guild Armorer and Guild Weaponsmith) do not have map icons, but may be found near those that do.

Some map icons are only found in areas that are part of the Heart of Thorns expansion.

Some map icons are only found in areas that are part of the Path of Fire expansion.

Some map icons are only found in areas that are part of the End of Dragons expansion.

There are some map icons which are only found in PvP areas especially the Heart of the Mists.

With the world map open, clicking on the eye symbol (

) displays a small menu allowing the user to toggle the visibility of certain groups of map icons. This may be useful in locations where several different icons overlap each other, or if you are looking for a specific icon and wish to hide the others.