This article is about the NPC. For the attribute combination "Laranthir's", see Vigilant.
Stub. Key elements of this npc article are incomplete. You can help the Guild Wars 2 Wiki by expanding it.
Reason: Expand biography, add missing skills.
Spoiler alert: The following text contains spoilers relating to he personal story, Living World and all expansion. 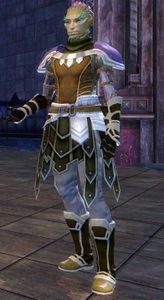 I am a Grand Warmaster, Almorra's second-in-command. Should she fall, I will lead the order...but I pray to the Tree I am never needed in that role.

Grand Warmaster Laranthir of the Wild, secondborn of the sylvari, is a prominent member of the Pact. He is also one of the leaders of the Vigil alongside General Almorra Soulkeeper, Warmaster Efut, Lord Rodrigo of Cormoch, and Jhavi Jorasdottir. As Grand Warmaster, he is the Vigil's second-in-command, tasked with taking leadership of the order in the event of General Soulkeeper's death.

Laranthir awakened in the Grove as a secondborn[1] sylvari around 1304 AE,[2] circa two years after the firstborn.

Following the Elder Dragon Kralkatorrik's rise in 1320 AE, Laranthir met with the charr Almorra Soulkeeper who had become a gladium after being forced to slay her warband whom the Elder Dragon had Branded during his flight south. Almorra had fallen into vengeful depression at the realization how impossible it was for a single person to take on an Elder Dragon. Laranthir and a few other unlikely allies helped her return to her senses, and it was Laranthir in particular who convinced Almorra to turn her mission of vengeance into a mission of justice. Almorra made a vow to her fallen warband to destroy Kralkatorrik as well as the Crystal Dragon's minions.

Realizing that only through unity could the Tyrian races hope to defeat the Elder Dragons, and wanting to save her from herself, Almorra founded a military organization which she named the Vigil, coining the order's motto "Some must fight, so that all may be free."[3][4][5] As the General of the Vigil, Almorra made the co-founder Laranthir a Grand Warmaster, her second-in-command, and dictated that he would succeed her as general if she fell in battle.[1] Laranthir had often sought love but had not found it. Until that day, he swore to serve the Vigil as if it were his beloved.

In 1326 AE, Laranthir and Almorra learned about the Molten Alliance assaulting both charr and norn. The Vigil tasked able adventurers, including the Pact Commander, to raid Molten Facilities to hamper enemy operations and free captives.

When Durmand Priory scholars reported that Scarlet Briar's Breachmaker might have disturbed an Elder Dragon via redirecting a ley line in the aftermath of the Battle for Lion's Arch, Laranthir petitioned Trahearne to send an airship to Lion's Arch to investigate. Later, he personally congratulated the Pact Commander for defeating Scarlet while explaining that the Pact could not initially get involved with stopping Scarlet as the organization's purpose was to fight the Elder Dragons and not protect cities from deviants.[6]

The Pact eventually learned that Scarlet's tampering with the ley lines beneath Lion's Arch had led to the Elder Dragon Mordremoth's awakening and the emergence of its Mordrem minions which began appearing around the world in areas with magical hotspots or powerful artifacts. Laranthir joined Trahearne at the World Summit in the Grove in 1327 AE, though he remained out of the meeting itself while leaders of five nations discussed the threat Mordremoth posed to the world. Laranthir and people below the Omphalos Chamber were forced to fight a sudden Mordrem invasion while Mordremoth's champion, the Shadow of the Dragon, attacked the Pale Tree. The Pact Commander was successful in driving the Shadow of the Dragon away although the Pale Tree was weakened from the attack and fell unconscious.

Following the defense of the Grove which had invigorated many sylvari to avenge their Mother Tree, Laranthir helped Trahearne prepare the Pact to focus on Mordremoth from the staging ground of Camp Resolve in the Silverwastes. Although the Pact had to speed up its schedule to strike at Mordremoth as soon as possible before the Elder Dragon could grow in power, they had gained enough funding, supplies and reinforcements from the five nations to be able to launch an airship fleet to the Heart of Maguuma where Mordremoth was believed to reside in. Laranthir accompanied Trahearne and members of Destiny's Edge to the jungle, certain that they could defeat Mordremoth like they had done with Zhaitan.

When the Pact Fleet was destroyed by a joint attack from Mordremoth and sylvari who had succumbed to the Elder Dragon's call in 1328 AE, Laranthir sent a request for aid to the Pact Commander, who then assigned him as the new leader of the Pale Reavers in Carys's absence. Despite facing distrust from some members of the Pact who believed that all sylvari had become a liability after some had turned into the Mordrem Guard, Laranthir was able to rescue a few surviving Pale Reavers to boost his forces. He and Chief Aviator Skybreaker joined forces to bring down Mordremoth's minions and cleared a path for air support.

Once the Pact had reorganized itself in Verdant Brink, Laranthir led it as well as the jungle allies they had gained along the way, such as the Exalted, in the assault on Mordremoth in the heart of Dragon's Domain. He witnessed the Elder Dragon's demise after a fierce battle and was relieved that Mordremoth's buzzing voice was finally gone from his head. However, the victory came at a great cost to the Pact: not only had they lost many soldiers in the war, but Trahearne had sacrificed himself to end Mordremoth for good, leaving the Pact without a marshal to lead it.

After dying in the rogue god Balthazar's ambush in 1330 AE, the Pact Commander's soul appeared in the Domain of the Lost where all spirits which experience sudden, violent deaths end up in. While recovering their name and remembering their purpose to be properly judged, the Commander was subjected to fragmented visions of past deeds, including an encounter with Laranthir from the Maguuma campaign.

Some time after the allied Tyrian and Elonian forces had slain Kralkatorrik on Dragonfall in 1332 AE, Laranthir submitted a request for a temporary leave of absence so he might return to the Grove. Almorra granted the request, expecting Laranthir to return to his duties at his discretion. In the Grand Warmaster's absence, Jhavi Jorasdottir assumed the role of second-in-command of the Vigil.[7]

Laranthir learned about Almorra's death at the hands of Blood Legion Imperator Bangar Ruinbringer and his subordinate Ryland Steelcatcher by 1333 AE as well as the Elder Dragon Jormag's awakening which the rogue charr's actions had caused. However, against Jhavi's expectations, Laranthir did not immediately resume his duties as Grand Warmaster, leaving Jhavi to continue leading the Vigil in his absence as Tyrian forces had to battle against both Jormag's icebrood and Primordus's destroyers.[8]

In Vigil Keep, if not Vigil
Forgive us if we seem unfriendly. The Vigil soldiers stationed here have much on their minds. Enjoy your visit.

Is everything all right? You sound a little sad.

Not sad, exactly. Just resigned. I've often sought love, but never found it. Perhaps one day. Until then, I'll serve the Vigil as if it were my beloved.

That's a nice frame of mind, but I don't think it will make you any less lonely. Good luck, Laranthir.

In Vigil Keep, if Vigil member
(at early state of the personal story)
Step lively, soldier. Everyone either contributes to or undermines our success. There is no middle ground.

Is everything all right? You sound a little sad. (continues like above)

(after The Battle of Claw Island)
We have troops ready to follow your lead to Claw Island. You have only to say the word.

Thank you, sir. I look forward to that day.

(after Retribution)
You're very lucky to have this opportunity. Adventure, travel...love. Would that I could find the same.

Section-stub. This key section of the article is incomplete. You can help the Guild Wars 2 Wiki by expanding it.
Reason: Possibly missing dialogue. Check if he can be interacted with during the meta.

In Dragon's Domain
Well met, Commander. It seems[sic] find ourselves on the dragon's doorstep.

Is this really it? Have we really found Mordremoth in its lair? (If didn't complete Hearts and Minds)

Our scouts believe the creature before us is feeding on ley-line energy for its master, but Mordremoth is an entity of mind and dream. That's where you'll have to go to defeat it.

I have faith you'll find a way in, Commander.

So even if we can't end things here, we can weaken Mordremoth. Let's do it.

I don't understand. I thought I'd beaten Mordremoth... (If completed Hearts and Minds)

Though you killed Mordremoth within its realm of mind, the physical manifestation of its hunger remains in our world, still feeding on this hub of ley-line energy.

In that case, let's put it out of our misery.

After the final battle
Commander! It's great to be reunited with so many old faces and see how people put aside differences to fight together.

Yes, we truly worked as one.