This article is about the organization. For the blog post, see The Mordrem Guard.
Spoiler alert: The following text contains spoilers relating to Guild Wars 2: Heart of Thorns and Living World Season 3. 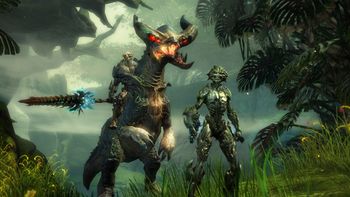 The Mordrem Guard are one of Mordremoth’s most dangerous weapons. Because they include former Pact officers and Pale Reavers, they are quite skilled at combat and they know the Pact’s standard tactics. And unlike other minions of Mordremoth, the Mordrem Guard are smart and their efforts are well coordinated. While their minds are not entirely their own, they retain all their previous intelligence and can talk and organize themselves to fulfill the dragon’s wishes. This makes them very hard to track and even harder to defeat.

The Mordrem Guard are a specific type of Mordrem. They are sylvari who have answered the Elder Dragon Mordremoth's call and succumbed to its influence during and after the Pact fleet's crash in the Heart of Maguuma in 1328 AE.[1] They include former members of the Pact and Pale Reavers and as such know the Pact's tactics, making them dangerous adversaries. They spearhead the creation of even more minions for Mordremoth by attempting to convince their former sylvari brethren—Dreamers, Nightmare Court and Soundless alike—to join the Elder Dragon, and use Mordremoth's Blighting Trees to create Mordrem clones of all creatures.

The Mordrem Guard in the Heart of Maguuma are led by three unique commanders: Axemaster Hareth, Blademaster Diarmid and Stavemaster Adryn. When a commander falls in battle, Mordremoth simply creates a new one with the same look, same name, and same deadly abilities as the one it replaced. These unique commanders appear to have their consciousnesses transplanted into new host bodies upon the death of the previous body, allowing them to continue leading the Mordrem Guard against the Pact and the jungle's inhabitants.

When a sylvari becomes a Mordrem Guard, they transform physically. Their bodies grow in height and girth and are noticeably more muscular. Their outer layer transforms from softer plant material to a hardened, bark-like coating that provides extra protection in battle and gives them a fierce, intimidating look. They also undergo a psychological transformation: although they retain all their previous intelligence, memories and they can talk, they fully devote themselves to the jungle dragon whom they regard as their destiny and reject both the Dream of Dreams and the Nightmare. This transformation is a dark mirror of the sylvari's natural ability to change their own appearance but in this case is being directed by Mordremoth rather than the individual sylvari.[2]

While strength of will and being able to distinguish one's own thoughts from the call is a determining factor for whether a sylvari falls to Mordremoth's influence, the Elder Dragon can also force its will on stronger, resisting sylvari if they are in close enough proximity to the heart of its domain.[3][4] However, if any Mordrem Guard are far enough from the dragon's call, they can retain their sense of self and may struggle against the murderous impulses for a time.[5]

Mordrem Guard regard Mordremoth as their destiny and reject their former lives and all the teachings of the Pale Tree. In fact, some express disdain for the Pale Tree's presence and the fact that she kept them from this fate for so long; they feel that all those Wyld Hunts in their past were just distractions, pulling their focus away from their true purpose. However, some Mordrem Guard are less willing to reject the Pale Tree; despite this, they cannot help but follow the Elder Dragon's commands even though their original personality is aware of their body's actions while being unable to stop themselves.[5]

Upon discovering that the Pale Tree had fallen out of its influence and produced sylvari, Mordremoth probed the Dream of Dreams which shielded the sylvari from its reach. The Elder Dragon eventually connected with the exposed mind of Scarlet Briar whom it slowly began to corrupt with maddening whispers. It implanted thoughts and plans that Scarlet believed to be hers and taunted her until the sylvari fully succumbed to the dark influence by 1326 AE.[6][7] After Mordremoth began feasting on the magic of the ley lines which Scarlet had redirected to the Heart of Maguuma after the Battle for Lion's Arch, it expanded its influence and whispered into the mind of another sylvari, Aerin, driving him close to madness.[8] Following these early conversion attempts, Mordremoth sent its minions to attack the Pale Tree in the Grove, injuring the Tree enough for her to fall unconscious, which in turn lessened her protection over sylvari.

As the Pact fleet launched to the Heart of Maguuma to face the Elder Dragon and its minions in response to the invasions on the Grove and other settlements in 1328 AE, Mordremoth unleashed a surprise attack with vines that took out several airships above Verdant Brink. It simultaneously abused its connection to the Dream and the Pale Tree's weakened state to sway multiple Pact sylvari to its side.

After the fleet's crash, the affected sylvari began reorganizing under Mordremoth's banner, titling themselves the Mordrem Guard while carrying out the dragon's orders to kill or capture any who resisted them. Although some Mordrem Guard were unable to stop themselves from attacking their former Pact comrades while being aware of their actions, others embraced the destiny Mordremoth had in store for them and used the Pact's tactics against itself, at first infiltrating its ranks by posing as still loyal allies and at other times ambushing Pact members when they least expected it.[1]

Three commanders rose to lead the Mordrem Guard around this time: Axemaster Hareth, Blademaster Diarmid, and Stavemaster Adryn whose bodies transformed beyond even most Mordrem Guard. The three commanders gained a boon from Mordremoth: whenever they fell in battle, they would be reborn from Blighting Trees with their memories and skills intact, effectively making them immortal as long as Mordremoth was providing for them. The commanders sent raiding parties not only to Pact camps but also villages of the jungle's natives such as the Itzel and the Nuhoch, killing and capturing more victims to be turned to the Blighting Trees for the Mordrem creation process.[9]

As they ventured deeper into the jungle and fought against the Pact, the Mordrem Guard discovered the Exalted in Auric Basin and led assaults on the Exalted city of Tarir while establishing footholds around Blighting Trees such as the Corpse Grove and Morwood Wilds. Some Mordrem Guard also oversaw an army of Mordrem marching east of Tangled Depths past the Vine Wall.

Several Mordrem Guard journeyed south to Dragon's Stand to assist the Mordrem in fighting against invading Pact forces which tried to reach Mordremoth's sanctum. Ultimately the three commanders arrived on the battlefield, attacking the Pact and its jungle allies on multiple occasions, even aiding Mordremoth in the final battle at the Dragon's Domain.

Following Mordremoth's demise in the Pact's campaign, some Mordrem became unhinged without the Elder Dragon's voice to guide them and continued being a threatening presence in the Heart of Maguuma in 1329 AE and beyond.[10] In 1331 AE, one of the sylvari who had been affected by Mordremoth's call returned to Central Tyria during the revived Festival of the Four Winds and admitted that he could still hear the Elder Dragon's echoes in his head long after its demise. Whether the rest of the Mordrem Guard returned to Central Tyria to atone for their actions or not is unknown, however.