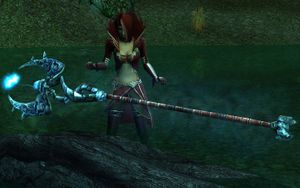 Livia discovers the Scepter of Orr some time after the events of Guild Wars: Eye of the North.

The Scepter of Orr is one of two legendary staves that were created prior to the Exodus of the Gods. The Scepter and its counterpart, the since-destroyed Staff of the Mists, were each given to one of the great nations of the world, although which weapon went where has since been forgotten. The weapons were intended to offer protection, but their power corrupted their bearers and unleashed horrors upon the land. Eventually, the Six Gods were forced to intervene by striking down both kings and sealing each weapon within its bearer's tomb.[1] Afterward, the Scepter was moved to Orr, where it remained and was once possessed by King Reza until it went missing just before the Cataclysm in 1071 AE.[2][3]

The Scepter next appeared in 1072 AE, when the White Mantle recovered it from Majesty's Rest and kept it from the invading undead until it was stolen by the Shining Blade from the Temple of the Unseen.[3] As part of their effort to counter the White Mantle, the rebels arranged to give the Scepter to Vizier Khilbron, who was thought to be a survivor of the Cataclysm. In fact, Khilbron was a powerful Undead Lich who wanted the staff so he could control the titans. After Khilbron's defeat at Abaddon's Mouth, the weapon was spirited away before it could be destroyed by the volcano. Some time after the defeat of the Great Destroyer in 1078 AE, the human necromancer Livia sought out and recovered the Scepter and had it in her possession for some time.

While the Staff of the Mists was known to bend the fabric of the universe to the will of its user,[4] less has been recorded about the Scepter's powers. Khilbron directed the titans with it and he also claimed that it could be used to control the undead.[5] It was seen influencing souls and the wielder's energy. Furthermore, Livia, the Scepter's last known possessor, has extended her life with it for over a century and a half after finding it.[6]