This article is about the zone. For the achievement category, see The Silverwastes (achievements). 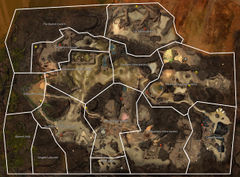 The Silverwastes, once known as the Silverwood, is an explorable zone in the Maguuma Wastes. This area marks the first advance of the Pact toward the Elder Dragon Mordremoth and its army of Mordrem. One of its lieutenants, the Mordrem Vinewrath, is trying to take control of the Silverwastes for its master.

The Silverwastes also boasts a large network of underground caverns, which are mostly inhabited by skritt, who are lending their tunnels to the Pact forces to allow them to travel faster around the area. From time to time, they will close due to the presence of bandits who fled Fort Vandal looking for a new place to set up camp.

Bandit Crests, as well as give the regular map completion rewards.

These spawn randomly and are each worth a Mastery Point