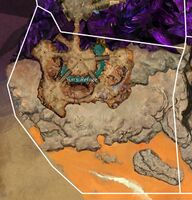 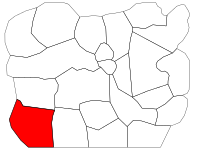 This place has a new purpose. Feels like it needs a new name. I hereby declare thee...Sun's Refuge!

Sun's Refuge is an instance accessible to players in Living World Season 4, episode 4: A Star to Guide Us.[1] Though well-hidden and largely forgotten by humans, this ancient cavern has nonetheless seen several uses throughout its existence: as a shrine to the goddess Melandru, as a cistern for the Elon's floodwaters, and 250 years ago, as a sanctuary for the Order of the Sunspears during their campaign to prevent Nightfall. Now, history repeats itself as the Sunspears once again make their home here. The instance changes based on the player's progress and actions in the Living World, and functions as a content hub.[2] After completing Legacy, the third part of A Star to Guide Us during Living World Season 4, access to Sun's Refuge is unlocked for all characters on that account.

After finding each as a part of Exhibit Aye collection

After finding each as a part of Readathon collection, behind Laila

In the northern entrance
(Before a Mysterious Chest appears)
Sunspear (1): What was that noise? Overhead, just now?
Sunspear (2): Oh, probably just another dragon.

In the west section
(After recruiting Sonu)
Sonu: The upside to being mortal again—there's a limit to how much I have to remember. Like names. And birthdays.
Sonu: Odd how many memories live in objects. How many friends I can remember now. Like Yoru. And whatshername.
Sonu: Is this feeling—am I feeling nostalgia? How strange. And disturbing.
Sonu: These notes I kept...huh. Good thing I wrote this all down. Wow, I really hated that guy. What did he do again?

(After completion of the event Stop "Joko" from recruiting the Awakened!)
Ambassador Sianna: It's no palace, but it'll do.
Former Grand Vizier Utumishi: Not enough bones for a proper palace, anyway.
Ambassador Sianna: Could use yours if you're volunteering. Start a little pile, like Joko's—right here.
Former Grand Vizier Utumishi: Hmph. Over my un-Awakened body.

(Before completing the achievement The Convergence of Sorrow I: Elegy)
Sunspear (1): That master armorer kitted out the whole Mordant Crescent. Think we could get her to work for us?
Sunspear (2): If she ever stops crying.
Sunspear (1): An Awakened...crying? Do they still have tear ducts?

(After completing the achievement The Convergence of Sorrow I: Elegy)
Sunspear (1): Look at her work! I've only heard of some of those techniques in stories.
Sunspear (2): Makes you see Awakened differently, doesn't it? They've got decades, even centuries of skill.
Sunspear (1): Yeah. Dibs on her next helmet.
Sunspear (2): Hey!

Sunspear Cadet (1): I wish we had, you know, an expert here... Someone who could keep us on our toes.
Sunspear Cadet (2): I know what you mean. I don't know how to get better!

(After completion of Poster Child)
Eshal: Hey! Pick up the pace! Swing harder! Fight better! You call that a stab?
Sunspear Cadet (1): I never... I never asked for this...
Sunspear Cadet (2): This is horrible...
Eshal: You there! Less chatter, more focus! How you gonna take down a dragon when your form's this bad?

(After completion of From the Ashes)
Zafirah: Why do I sense Balthazar's presence here? I don't understand.

Zafirah: Guard that sword with your life.

Zafirah: Strange times make for strange alliances. I miss working with my brothers and sisters.

Zafirah: This is not where I expected to be.

Zafirah: Balthazar, if any part of you remains, speak to me. I am faithful; I am listening...

Zafirah: Unless you're here to tell me we're leaving to fight Kralkatorrik, I'm not interested.

Zafirah: Please leave. I want to be alone.

Zafirah: I'm sure you have something better to do.

In the southeast section
(After completing Defeat the Branded djinn Vemyen)
Ziya the Radiant: I still wonder how you got out of that bottle.

Ziya the Radiant: Well of course jackals would be perfect, they're made of the stuff...

Ziya the Radiant: Going off and dying and leaving me like that. It'll be ages before I find another suitable nemesis.

Ziya the Radiant: What makes our magic impervious to the Brand? Why did Vemyen's magic fail? I must find the answer.

(After completing the achievement In a Grain of Sand)
Ziya the Radiant: If I conjured a null reactor here...and seeded the locus into a physical object, like a shield...

Ziya the Radiant: No no no, Brand magic would go through this like a needle.

Ziya the Radiant: Ooh, no, the wielder would collapse along four dimensions into a point. A safe, Brand-shielded point, but still.

Ziya the Radiant: In some ways this spell would be a memorial. For a pain-in-the-wisp djinn who loved humans. For Vemyen.

In the east section
Refugee (1): My grandmother's sick. We brought her with us to get away from the Brand, but how long will she last here?
Refugee (2): I'm worried about how long any of us will last. Young, old, healthy, infirm...
Refugee (1): She's the matriarch in our family. I don't know what we'd do without her.
Refugee (2): Life goes on, you know. We find our own ways.
Refugee (1): Ugh. She's not dead yet!

Refugee (3): I'm going to miss my garden most of all. Is that odd?
Refugee (4): There was a beautiful apple tree by my house. All gone now. Branded. Hurts worse than the house.
Refugee (3): It's funny what the heart holds on to.

Naja: Such beautiful sounds, made by such terrible things...

Naja: This sound... There's something intriguing about it. Musical. Lilting. Purposeful.

Naja: I wonder what this would sound like in the Mists. How much can ghosts hear, anyway?

Naja: Strange. A part of me rings like a bell when I hear the water running over these crystals.

Naja: Wonder if you could make musical instruments from Brand crystals. If the Brand scar could sing like a harp.
Naja: Hm. Wind would have to be right.

(Before completing Readathon)
Laila: These kids keep chasing choya, they'll get needles all over. Wish I had something to distract them with.

Laila: If only I could find a few good books for the children. Books with adventurers. Pictures. Pretty colors.
Laila: And why stop there? Why not find books for all the refugees?

Laila: So much is happening, all at once. How can I just ask someone to drop everything and look for books?

Laila: Hey, you there! Stop chasing that choya! Come read a good book!

Laila: If you don't know what to do, why not open a book? A story will transport you away from here.

Kossan Dejarin: What a feat. You led the Sunspears back to their ancestral home.
Spearmarshal Zaeim: More like ancestral hiding place. When times are hard, we go to ground.

Koss Dejarin: Before you ask, Kossan—yes, from everything I've seen, I'm proud of you and how you fought the Forged.
Kossan Dejarin: That's...that's... Thank you.
Koss Dejarin: That said, I have some notes. Your backswing, your footwork, and you've really gotta work on that battle cry.

Lord Faren: And as I held those explosives I thought to myself, "Faren...what would a HERO do?"
Lord Faren: Was it painful? Excruciatingly so. But I'd perform that noble act a thousand times if it meant keeping my friends safe.
Lord Faren: Besides, I got more than a few licks in myself. Those brutes will rue the day they crossed Faren: Master of Swords!
Spearmarshal Zaeim: Really? That's not what I heard.
Lord Faren: Why, what have you heard?

Spearmarshal Zaeim: Kossan here has all kinds of questions for you.
Koss Dejarin: Really? Let's hear them.
Kossan Dejarin: I, uh... I... Maybe another time.

Taimi: All those years of college-level synergistics, all those all-nighters, and for what?
Taimi: To become a dragon's interior designer.
Taimi: Hey, that actually doesn't sound half bad.

Taimi: Aurene can be SUCH a teenager. Teenagers like well-decorated bedrooms, don't they?

Taimi: Who knew all that theoretical Dragon Lab research would end up in a practicum?

(Before completing Storm Tracking)
Gorrik: It's a crime against Elonian biodiversity. I could have gotten a paper out of it.
Taimi: You know, maybe the broodmother left an egg sac somewhere. One that the commander didn't see.
Gorrik: Yes, yes...you're right, that's quite possible. Blish! Can you go look for egg sacs for me?
Blish: Do I have to?
Gorrik: It's for science!
Blish: All right, I'll do it. But not for science.
Gorrik: What did he mean, "not for science"? Of course it's for science.
Taimi: No idea. You're his little brother, don't you know him more than anyone?

Taimi: Your golem arm is SO cool. It has all those built-in cloaking functions!
Taimi: If that portal malfunction hadn't chopped it off, I'd never have known! Glad you got it back, though.
Blish: Thank you. I'm blushing.
Gorrik: Blish has all kinds of stories. Don't you, Blish? Why, back in our wild college days—
Blish: We're not telling that story.
Gorrik: Oh, come on.
Blish: If you do, I'll tell the one about you and the norn beer and your professor's array of elemental detectors—
Gorrik: That never happened.
Blish: He's right. That never happened. And neither did the incident with me and Phlunt's thaumaturgic de-dolyakinator.
Taimi: How was I not there for this?
Blish: You were studying. It's why your grades were better than ours.
Taimi: SO not worth missing that.

(After completion of Hunt the Hunter) for the day
Second Spear Koja: Relying on those caravans makes me nervous. Our supply lines could be cut off at any point.
Second Spear Nimani: What's the alternative to dolyaks? Delivery fish? Cargo birds? Corsair cannons?

(After completing Defeat the Branded djinn Vemyen)
Sunspear (1): Getting more crowded in here every day. Almost stepped on Ambassador Sianna's foot just now.
Sunspear (2): Ain't it wild? I swear, today I saw a djinn!
Sunspear (1): Means all of Elona is pulling together to fight Kralkatorrik. I like our odds. 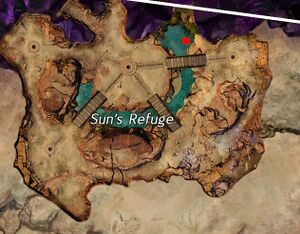 Map for the Swan Dive achievement.