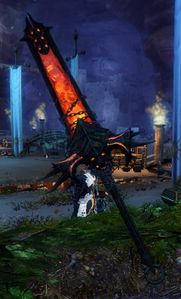 Balthazar's Sword is the greatsword wielded by Balthazar, the God of Fire and War, during his campaign against the Elder Dragon Kralkatorrik.

Statues of Balthazar, the God of Fire and War, traditionally depicted the god wielding a greatsword. Some of Balthazar's epithets were the Blade of Conflict and the Sacred Sword,[1] suggesting that the greatsword was important to the Church of Balthazar via its association with the god himself.

Upon his return to Tyria in a weakened state in 1329 AE, the disguised Balthazar did not initially wield a greatsword. Once he had used Taimi's Machine in the volcano of Draconis Mons to absorb enough magic from the paralyzed Elder Dragons Primordus and Jormag, the former God of Fire and War was finally able to manifest his greatsword although he was forced to leave shortly after due to the Pact Commander and Taimi destroying the machine before the two Elder Dragons could be killed. 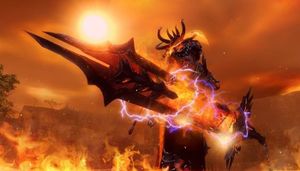 With Primordus and Jormag having become inaccessible to him, Balthazar set his sights on the next viable Elder Dragon, Kralkatorrik, and drafted an army of mortal and Forged followers as he led the campaign in person in the Crystal Desert and Elona in 1330 AE. Upon discovering that Kralkatorrik's weakness was any creature which shared his crystalline power, the God of War began hunting Kralkatorrik's grandson Vlast to use the dragon's power against the Elder Dragon. He struck Vlast down with his greatsword at Godfall Tower in the Desert Highlands only to end up fighting against the Pact Commander, Canach, Kasmeer Meade and Rytlock Brimstone who had come to the dragon's rescue. After incapacitating the party with his magic, Balthazar attempted to kill the Commander with his greatsword, only to end up piercing Vlast instead who jumped in front of the sword and exploded in an act of self-sacrifice.

Being forced to flee once more and no longer able to use Vlast for his campaign, Balthazar set his sights on Aurene, Vlast's sister who was likewise connected to Kralkatorrik. He ambushed and toyed with the Commander in a mockery of a duel at the Pillars of Supremacy in Elon Riverlands, knowing that the mental bond between the Commander and Aurene would make Aurene come to help her champion. After luring Aurene to him, Balthazar used his magic and greatsword to capture the young dragon and killed the Commander before gathering his army to invade Kodash Bazaar in the Domain of Vabbi where Kralkatorrik had been sighted.

While his army focused fighting against the Awakened in the Battle of Kodash Bazaar, Balthazar took his Warbeast, empowered by Aurene within it, to fight Kralkatorrik itself. However, when the Commander returned from the dead and destroyed the Warbeast to free Aurene in the nick of time, Balthazar focused on taking down the Commander before he would resume fighting the weakened Kralkatorrik. Despite using both his magic and greatsword in combat, Balthazar was felled with the combined efforts of Aurene and the Commander who was wielding Balthazar's former sword Sohothin.[2] The magical blast caused by Balthazar's demise sent the greatsword flying to Jahai Bluffs where it landed into what would become the Central Brand Scar and became dormant.

After Kralkatorrik began sending minions through Mist rifts to hunt down Aurene, the Commander and Blish began thinking of a way to predict where the Elder Dragon or his minions would appear next so the Elonian forces could evacuate settlements before the attacks. Deciding that they needed to affix a tracking device on the Elder Dragon, Blish realized that Balthazar's greatsword would have enough magic to lure Kralkatorrik to it so they could follow up with the plan.[3]

The Durmand Priory had calculated the greatsword's trajectory after the Battle of Kodash Bazaar and entered Jahai Bluffs once it was safe to search for the sword in 1331 AE. However, the sword was stolen from the Priory expedition by Zafirah, a surviving Elonian priestess of Balthazar, who took it to Argon Garrison and protected it from any would-be thieves. After a clash with the Pact Commander who had also come for the sword, Zafirah relinquished it. She eventually followed the Commander to Sun's Refuge to witness the sword being reignited with the help from Rytlock's sword Sohothin.

The reignited greatsword began seeking out its fallen master only to stop at where Aurene had last been seen in, making Zafirah realize that the sword was perceiving Balthazar's magic through Aurene. The Commander and Blish devised a plan to track Kralkatorrik's movements by making him ingest the sword which would have a tracker attached to it. To accomplish the task, the pair took the sword into the Mists and used its magic as bait to lure Kralkatorrik to eat it.

Upon sensing the approach of the Elder Dragon's Brandstorm, however, the greatsword lashed out and broke the tracker's power source. In order to ensure that the tracker maintained power indefinitely, Blish shut down his higher functions and attached his golem body to the tracker and the sword, sacrificing himself for the sake of the mission, before Kralkatorrik swallowed the sword—and Blish—whole.

Section-stub. This key section of the article is incomplete. You can help the Guild Wars 2 Wiki by expanding it.
Reason: Missing descriptions