This article is about a Forged creation. For other uses, see Warbeast.
Spoiler alert: The following text contains spoilers relating to Guild Wars 2: Path of Fire. 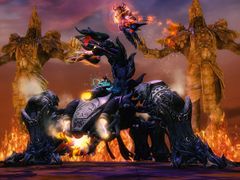 The Crystal Dragon dares to fight back? Ha! My warbeast is supreme!

The Warbeast is a giant machine created by the Forged, controlled directly by Balthazar and designed with the sole purpose of confronting the Elder Dragon Kralkatorrik. Pieces of it can be found, pre-construction, during Night of Fires and Crystalline Memories, forshadowing the Warbeast's later appearance. The machine is powered by Branded crystals, siphoning magic from them. Originally intended to imprison Glint's scion Vlast, it was retrofitted to hold the other scion, Aurene, after Vlast's demise. During the Battle of Kodash Bazaar, the Warbeast siphons power from Aurene to paralyze and damage Kralkatorrik before it is destroyed by the Pact Commander.

Section-stub. This key section of the article is incomplete. You can help the Guild Wars 2 Wiki by expanding it.
Reason: Missing skills, descriptions.