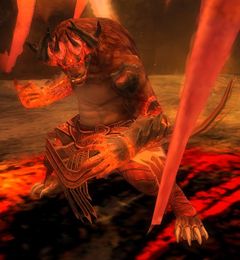 The god of flame commands you to BURN!

Gaheron Baelfire is the Imperator of the Flame Legion. He is attempting to ascend into godhood, naming himself the "god of flame"; it is speculated by Logan Thackeray that the Flame Imperator is trying to copy, or is at least inspired by, the goddess Kormir's own ascension. Baelfire leads the Flame Legion through tyranny, uncaring about his subjects' lives and willing to sacrifice them for his own goals. As such, many modern Flame Legion rituals, such as the Baelfire ritual, involve self-mutilation or downright sacrificing lives to empower magic. The Flame Imperator has developed a cult of personality around himself, and his most fanatic followers call themselves the Godforged.

As Imperator of the Flame Legion, Gaheron Baelfire claimed to be a direct descendant of the Khan-Ur and had a fierce pet drake by his side. Aspiring for godhood, he developed a cult of personality around himself with his most fanatical followers mutilating themselves in the Baelfire rituals and calling themselves the Godforged.[1]

Gaheron was interested in magical artifacts with which to empower himself and sent an expedition to the Ring of Fire islands where his agents discovered Sohothin, an enchanted sword blessed by the god Balthazar which had once belonged to Prince Rurik of Ascalon. When the blade was transported to one of the Flame Legion's garrisons in Ascalon on its way to Gaheron, however, it was intercepted by the young Rytlock Brimstone working undercover who fled with it before the Flame Imperator's agents could catch him.[2] Rytlock's partner Crecia Stoneglow, however, continued staying undercover in the Flame Legion without the shamans ever suspecting her of being a spy, and she got closer to Gaheron as a result.[3]

By 1325 AE, Gaheron had developed a powerful spell which enveloped himself and the surrounding area in ever-burning flame and stone, making himself invulnerable to any but the strongest magics (such as his own spells while in this form). This spell was spread among the charr as a rumored weapon that would allow the Flame Imperator's ascension into godhood, and drew the eye of the Pact who wanted to find out what the weapon was and use it against the Elder Dragon Zhaitan.[4]

When the Pact and its allies from the Ash and Iron Legions stormed the Citadel of Flame, Gaheron attempted to subvert their forces from atop the overbearing Altar of Baelfire. However, Rytlock, Logan Thackeray, and the Pact Commander managed to reach Gaheron and subsequently killed the Flame Imperator by using his own magic against him before he could succeed in his goals.

Baelfire's death led to a power vacuum and a subsequent civil war between various ambitious Flame splinter groups for the Flame Imperator's vacant throne.[5] Even death, however, did not stop Gaheron entirely as his soul remained bound to the Eternal Flame, which a Flame Legion splinter group loyal to him attempted to use to give his soul a new physical body. A group led by Scholar Magg stopped the ritual and destroyed the Eternal Flame, however, banishing the Flame Imperator's soul into the Mists and ending his plans once and for all.

Following Gaheron's fall, Rodion the Vile was considered as a candidate for the next imperator of the Flame Legion. Rodion had been unusually large, and Gaheron himself had held Rodion's strength above all else. However, after Rodion had undergone experiments and blood transfusion in the Molten Alliance and had been transformed into a crazed berserker, many members of the Flame Legion became afraid of him. Some Flame Legion members speculated that Gaheron might be moving mountains in the Mists out of spite after Rodion had traded the imperator's power of Flame to what the dredge had offered him. Rodion was slain during the Vigil raid to one of the Molten Alliance's facilities, leaving the Flame Legion fractured.[6]

In the following years, several Flame Legion members began voicing out their dislike for Gaheron's harsh policies. By the time of the All-Legion Rally held in Grothmar Valley in 1332 AE, members of an atoning Flame Legion splinter group viewed the progressive Efram Greetsglory as a better leader than Gaheron with some members even expressing hope that the late Flame Imperator would be suffering for his crimes in the Mists.[7][8]

Section-stub. This key section of the article is incomplete. You can help the Guild Wars 2 Wiki by expanding it.
Reason: If he has a specific behavior, put it here, if not remove this part

Section-stub. This key section of the article is incomplete. You can help the Guild Wars 2 Wiki by expanding it.
Reason: If no unique behavior, remove this part, otherwise list

Section-stub. This key section of the article is incomplete. You can help the Guild Wars 2 Wiki by expanding it.
Reason: Missing effects, remove if none