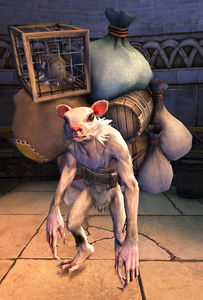 Skritt Burglars are female skritt that hide in a chest that appears randomly in certain locations.

When a player opens the chest, she will sometimes transform the player into an animal, which grants them an achievement, and the event Stop the skritt burglar before it escapes with the treasure will immediately start. Players must then defeat her to complete the event, but she will run around, avoiding combat, often leading players into hostile foes. When hit, she will sometimes drop loot bags that will stay on the ground for a while, so players can safely ignore them and focus on the event until the Skritt Burglar is defeated or escapes, then backtrack their steps to look for the loot bags and open them. These loot bags will have a distinctive purple glow so they can be easily noticed. If defeated, she will drop the big bag she carries around, which will have several items.

For a list of locations where the burglar's chest has been known to appear see: Skritt Burglar/locations

The Skritt Burglar can be encountered in every region of Tyria except the Ruins of Orr,Verdant Brink as well as in Dragonfall. Burgling the Burglars in Dragonfall can be gained for finishing the event not for been transformed into the animal. The animal you can get turned into, and thus the achievement you can get, depends on what region the burglar's chest appears in:

Stop the skritt burglar before it escapes with the treasure (80)

Stop the skritt burglar before she escapes with the treasure (80)