Contains a guaranteed item, a redeemable Black Lion Statuette, and 2 common items. Each chest has a chance for an extra rare item, including exclusive skins not available anywhere else. Preview available.

When activated, a Black Lion Chest window opens that allows the player to combine a chest and a key. 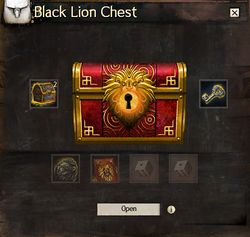 Each Black Lion Chest contains four items: a seasonal item, one Black Lion Statuette, and two common items. In addition there is a chance at an uncommon, rare or super rare item which will appear as an additional fifth drop. 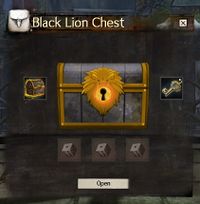