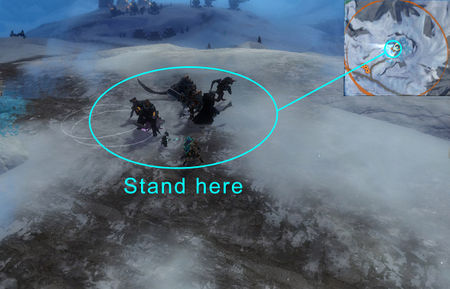 Stand here (tip of the V-shape black patch) to earn the achievement.

Crash Landing is an achievement earned after being crushed by the Claw of Jormag when it lands on you after being shot from the sky, between the first and second phases of the event.

During the first phase of the fight, the dragon will periodically rise up into the sky for a short time, then drop back down and protect itself with an ice shield. When the dragon is down to about 50% health or less, Pact forces will shoot it out of the sky. It will drop on the plateau and bounce west to the water, beginning the battle's second phase. Your goal is to stand in just the right spot so you are flattened by the dragon when it falls to the ground, before it bounces.

The general location is slightly northeast of the

icon on your mini map. If you are having trouble, try positioning yourself at the dragon's rear right foot before it is driven into the sky for the last time.