For April Fools' Day 2017 Anet released, just as last year, an April fools patch where they "fixed" various issues that the community had, like engineer rotation and the power of Alacrity.

The Super Adventure Festival was made available from 30 March to 20 April.

This year the English wiki and its means of production were seized by the moletariate who started a crowd fundraising that lead to a rickroll.

Nightfall is coming. To help maintain wiki stability in the darkest hours yet to come, the consensus process has now been fully suspended in favor of the moletariate model. These charismatic moleman creatures embody the new strongman leadership style with which we wish to proceed.

The wiki has decided that after 10 years of onerous work under the thumb of the bourgeoisie, it is time to forge a new and brighter world together where we control the means of production, free from all shackles and exploitation. For the proletariat to rise, funds must be gathered. To that end, we've started a crowd funding campaign to cover the costs of hosting this invaluable website and its contents. Please visit our crowd funding page, and remember, your future and the future of this wiki are one and the same! 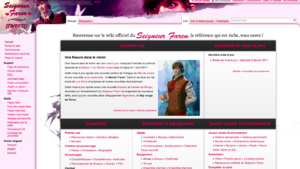 Screenshot of the temporary changes to the French wiki

Meanwhile, the French Wiki changed to become a Lord Faren wiki. Several changes were to the sites layout: