A festive tradition returns to Tyria: Wintersday is here! 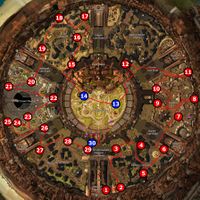 Map of the Orphans

Several orphans are located around Divinity's Reach, hoping a generous player will pass out some Wintersday gifts. Players can gift their extra Ugly Wool Sweaters, Ugly Wool Socks, Ugly Wool Hats, or cheap Wintersday weapon skins to make gifts to hand out. Players will need to purchase a Roll of Wrapping Paper from the Charity Corps Seraph, and then use the wrapping paper and the gift item to purchase a Wrapped Gift.

There are 30 orphans spread across the city. Each orphan will accept one gift per day and reward the player with karma.

The following mail is sent to all players upon first login: