After Zhaitan's defeat, Tyrians came together to celebrate something that had long been thought impossible: the death of an Elder Dragon. Now that Mordremoth's been muffled, Kralkatorrik's cracked, and Aurene has ascended, it's time to get back to partying!

From June 25 to July 16, Hoelbrak will host the return of the Dragon Bash festival. Bust open dragon pinatas, battle holographic dragon minions in the open world and the new Dragon Arena, bet on moa races, and stuff yourself with zhaitaffy.

Kralkatorrik is keeping a watchful eye on the festivities from above, but don’t be alarmed—he’s a hologram, too! 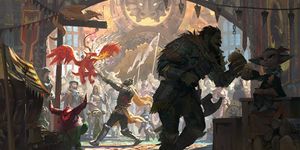 Dragon Bash is a release launching on June 25th, 2019 and ending on July 16th. It is a holiday event inspired by the historical Dragon Festival, but with a Hoelbrak flair (previously in Lion's Arch), intending to symbolize the resistance to the Elder Dragons. 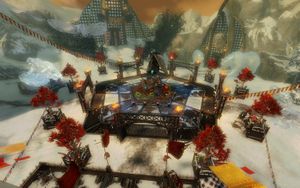 The decorated city center of Hoelbrak

The following mail is sent to all players upon first login: