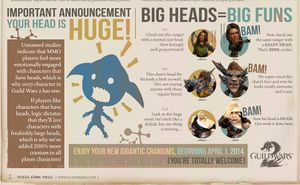 On the 1st of April, 2014, almost every NPC model was turned into a bobble-head. The NPCs' heads were scaled up and bounced around when in motion. The change affected all player models, most npc monsters, and even world bosses. Some npcs without an obvious head were unaffected, such as Inquest Golem Mark II.

Screenshot of the temporary changes

For this year's April Fools' Day, the wiki community collaborated with Dulfy. At midnight UTC, a press release was published explaining that the wiki has been acquired by Dulfy.net, in hopes of better contribution between the two sites. At the same time, several changes were made on the wiki: