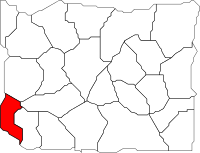 Aurora's Remains is an area in the southwest of the Brisban Wildlands. A long time ago, a tribe of human druids ventured into the jungle to make peace with the jungle. For many years they lived in harmony with the Maguuma, making their home in the Aurora Glade. Though there are rumors, no one has actually seen or heard from any of the druids in hundreds of years.

[Group Event] Draw out and destroy the Demagogue's spirit (26)

It can be reached by heading north of the hero challenge in the Toxal Bog.