This article is about the area. For the event, see Skrittsburgh Center (meta event). 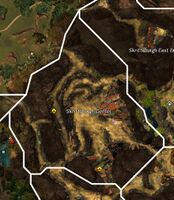 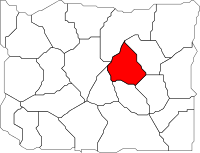 The Skrittsburgh Center is an area in the Brisban Wildlands. It serves as the main living area for the skritt inhabiting Skrittsburgh. The Skritt King is found here presiding over his subjects, in this unofficial capital and center of skritt culture. It is often the target of Sinister Triad raids. A full set of 8 crafting stations can also be used here.

There are three different paths. All require that the Skritt-gates be open. Whether the gates are open (

) depends on the state of the meta event and is indicated on the map.

All those present within the center are ejected if the Skritt King is killed when a meta event fails. All skritt-gates are then closed (

).The Skrittsburgh Center becomes unreachable until a new Skritt King is chosen and the skritt-gates are reopened (

All 8 Crafting stations are in the Skrittsburgh Center, but not shown on map, difficult to find unless you know where to look and there are no crafting NPCs to provide crafting materials or switch crafting professions.

Drive off the Inquest spies (20)

[Group Event] Protect the skritt king from the Nightmare Court (20)