Protect the Wyld Hunt party from the unseen hunter

Protect the Wyld Hunt party from the unseen hunter

Protect the Wyld Hunt party from the unseen hunter is a level 16 dynamic event that occurs in Zinder Slope leading into Venlin Vale. It starts when Valiant Alydael says: "Strange weather for fog..."

A group of 6 sylvari warriors (3 valiants and 3 wardens) patrol the path shown at right then depart from it (at no standard site) and walk down to the lake while the nearby hylek run away. The Unseen Hunter, a champion largos assassin, then appears underwater and kills the wardens one by one. When the remaining valiants try to retreat, he shows up on land and fights them. 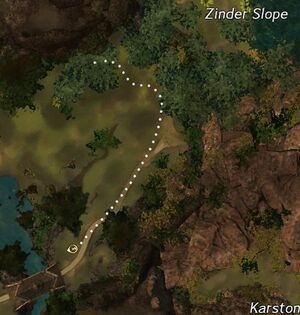 These are the expected rewards for a level 16 player. Higher level players receive dynamically adjusted rewards.

When the event starts:

Upon reaching the lake:

Valiant Britadgh: There's something unnatural about this fog. It does not move on the wind, and it is denser here.
Valiant Raeloir: Strange. The krait do not create a fog like this. Neither do the quaggan.
Valiant Alydael: I hear something. But I can't see—

When the first warden is pulled into the lake:

Valiant Alydael: Back away from the water! Something's hunting us!
Valiant Raeloir: I can't see. Where did it attack from?

After the group moves to another spot and the second warden is pulled into the lake:

Valiant Britadgh: No! How is it spotting us?

After the group returns to the first spot and the third warden is killed:

Valiant Alydael: Where is it? Does anyone see it?
Valiant Raeloir: Stay calm. We can't afford to lose our bearings now.
Valiant Alydael: I'd have my bearing if I could see what's killing us.

When the group backs off and the assassin starts to attack on land:

Valiant Alydael: No retreat! This monster will not defeat us!
Unseen Hunter: No escape.

If the event succeeds:

Valiant Britadgh: What was that?
Valiant Raeloir: I've never seen it before. I'm just grateful to be alive.
Valiant Britadgh: Strange, I still feel compelled to be here. Perhaps this creature wasn't hunting alone.
Valiant Alydael: Then we return to the camp and warn them before anyone else is harmed.

When the player approaches Raeloir (who bows and thanks the player):

After Britadgh and Alydael run back to the sylvari camp:

Valiant Britadgh: Beware the waters to the south, we walked right into an ambush.
Valiant Alydael: If any unusual activity is seen in that area, get out of there immediately.

If the event fails:

Unseen Hunter: This hunt is over.