The Team your character is on determines how other players and NPCs may interact with your player.

In PvE, there are 3 distinct Teams.

NPCs have varying AI when it comes to how they interact with alternate teams. A wolf might focus a neutral deer, for example, or it may ignore it in favor of player characters.

The player may encounter certain events that cause team swapping to occur. For example, while fighting Slothasor, eating a mushroom will transform the player into a slubling. As a slubling, any prior skills they had used now become hostile towards players and any player used skills may damage the slubling. Slothasor cannot harm the slubling.

Team Swapping is a rare occurrence, and is generally only seen in Raids.

In Structured PvP, a team refers to all the players allied to a group opposing other teams to achieve victory. While in a PvP match, players can converse with their team alone by using Team chat (/t or /team). Conversing with the enemy team must be done using traditional channels such as map or say chat. There are only 2 distinct teams, though NPCs follow a slight variation.

For the primary article on matchmaking in WvW, see World_versus_World#Matching_of_worlds.

In WvW, there are 2 types of teams fighting each other. There are 3 player teams determined by your server, and 3 NPC teams. Players can converse with teammates across various Borderlands maps by using Team Chat. They can also converse with teammates on the same map by using Map chat. Conversing with enemy players is disabled unless you use whisper chat or guild chat. Emotes are visible to all parties. 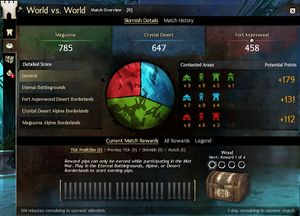 Teams in WvW are denoted by 3 different colors, Red, Blue, and Green. The EBG map is designed to give the "underdog" (red team) a few advantages. Depending on how well your server did the previous week, your server will generally be placed following these guidelines: