This article is about the mount. For other uses, see Jackal (disambiguation). 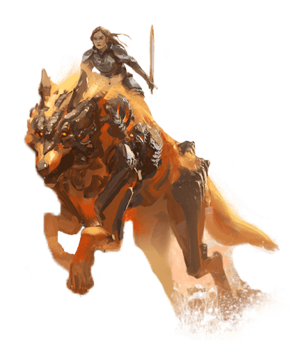 A magical construct formed by fusing the unbound energy of the Forgotten with the very stones and sand of the Crystal Desert.

The Jackal is one of the mounts found in the Crystal Desert in Path of Fire. It is a magical wolf-like creature capable of teleporting and making precision jumps. The jackal is made of sand and can store up to three charges of a quick movement-speed blink, which dissipates its body and allows it to reappear a short distance ahead. It can also use special Sand Portals throughout the desert. You'll maintain your momentum as you blink through the portals, creating interesting combinations for puzzles in the Crystal Desert.

Upgrades to the jackal mount improve its movement ability, evading all incoming attacks, as well as add additional effects to its engage skill Pounce, such as granting a strong barrier to allies when used.

The Jackal is unlocked at the Djinn Enclave in Sand Jackal Run, southwestern part of the Desolation. The surroundings are covered in deadly sulfurous haze, so a skimmer might be required to reach the area. The Djinn Enclave is located atop the spiral stairs. You can use the Skimmer with Ride the Wind to get to the staircase, or the Springer with High Vault to jump up to one of the lower platforms.

It is possible to reach this area through many other means, nevertheless, the required heart Help Drojkor, Spirit Squall, control jackals will not show up until you have trained either the Springer's High Vault mastery, or the Skimmer's Ride the Wind mastery.

Trade Contracts. The Jackal will cost 30

Trade Contracts if you have not completed the heart event on the day of purchase.

Jackals are elusive, magical creatures formed of shifting sands and given shape by magical runes. They can dissipate into sand to teleport short distances and dash through sand portals. The djinn of the Desolation create and tame them; prove yourself a worthy trainer, and you may befriend one.

Jackals are mystical constructs of wind and sand created and tamed by the djinn of the Desolation. In the wake of Nightfall, remnants of Abaddon's tormented magic left by the Margonites' presence seeped into the Crystal Desert. Left alone, this magic would coalesce into tormented remnants over time. To cleanse the Desolation of this magic, the djinn have gathered at Sand Jackal Run and taken to reshaping this tainted sand into jackal-shaped constructs. The djinn imbue their magic into runes taken from the bodies of tormented remnants to tame the tormented energies, and in turn the jackals. These jackals are feral and hostile initially, and still seek to bring about Nightfall. Once tamed, it is said that the eyes of the jackal are all that remains of their Margonite forebears.

Jackals remain attuned to the Realm of Torment and are capable of utilizing Sand Portals as entryways into the Mists to travel distances instantly.