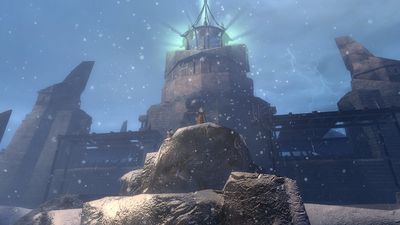 The Garrisons are the central keeps in each of the Alpine Borderlands.

Keeps are massive structures that require a significant, sustained effort to capture. You will need siege weapons and a large group of adventurers to breach a keep's walls and defeat its lord.

A keep is an objective in world versus world. Keeps provide a tactical advantage by assisting the organization of groups and also generate 8 points of war score every 5 minutes. An opposing group must break down the gate or walls in order to reach the interior to defeat the keep's lord to capture the objective. There are three keeps in each World versus World map.

Each keep has nearby resource camps, which can be claimed to replenish a keep's supply. Each resource camp will periodically send a dolyak supply caravan to the keep to bring it supply.

Once a keep has been captured, all enemy players will become

Marked (Keep) and visible on the map.