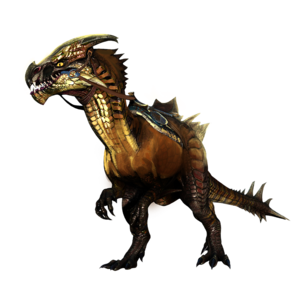 This article is about the mount. For other uses, see Raptor (disambiguation).

Swift, strong, and agile, raptors are stalwart explorers and great companions for exploring the far reaches of the Crystal Desert.

The Raptor is one of the mounts found in the Crystal Desert in Guild Wars 2: Path of Fire and in New Kaineng City in Guild Wars 2: End of Dragons. It is the first mount available to players upon reaching the Crystal Desert. The raptor leaps swiftly across great distances, making them useful for crossing large canyons. By holding down the hotkey, a leap will continue to its maximum distance. You can also release the hotkey early to drop out of the leap, which consumes less endurance. While mounted on a raptor, the character gains 100% increased movement speed.

Upgrades to the raptor mount improve its leap ability, as well as add additional effects to its engage skill Tail Spin, such as the ability to pull foes when used.

New accounts with an expansion unlocked will be granted permanent access to the basic raptor mount after they reach level 10 on a single character.

Characters on Play for Free accounts (as well as Core accounts without an expansions) will get a 10-hour trial of the basic raptor mount when they reach level 10. These cannot be dyed.

Raptor Masteries can still only be unlocked in the Path of Fire expansion.

All accounts with a character already over level 10 when this change was implemented on August 2nd 2022 missed this initial unlock checkpoint, but they will get the unlock on the next multiple of 10 level (so, a level 24 character will get the unlock at level 30). ArenaNet acknowledges that this is not an ideal solution and is working on additional methods to offer this unlock to players not caught by this fallback solution. [1]

The Raptor is unlocked in the course of the first Guild Wars 2: Path of Fire story mission, Sparking the Flame.

Characters below level 80 can unlock this mount, and gain access to the Crystal Desert, by joining the story mission instance of a level 80 character.

In Guild Wars 2: End of Dragons, it can be acquired free of charge by talking to Strigidae in Cobble Ward in New Kaineng City.

Masteries are not available to players without the Path of Fire expansion.

Raptors are hardy and swift, and surprisingly easy to train due to their intelligence. They can cross great distances in a single leap, making them the favored mount of many of the desert's denizens. Travelers are advised not to leave the city of Amnoon without obtaining a raptor companion.