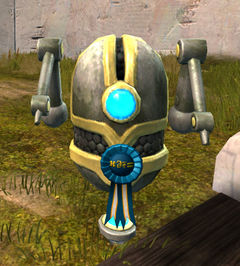 A begging golem. This oughta be a laugh.

Hero-Tron (also Bait-o-Tron, originally known as Job-o-Tron, and subsequently Hobo-Tron, Ho-Ho-Tron, and Heal-o-Tron) currently serves under the name Bait-o-Tron to provide the bait of Bloodstone shards to lure the Death-Branded Shatterer out to Almorra's Stand where it can be fought. Additionally, it serves a purpose in Lion's Arch as a job placement golem under the name Hero-Tron assisting repatriated refugees and new residents of Lion's Arch to find jobs. Hero-Tron is also the source of completing the Glutton for Guidance achievement. As a reward for completing the achievement, Hero-Tron gives the player a consumable employment pamphlet worth 5,000 karma on consumption.

Not much is known of Job-o-Tron's early existence other than being one of the many golems that worked with the Consortium. Job-o-Tron was specifically Subdirector Noll's pet project as well as having a personality matrix heavily influenced by Noll.

After the defeat of Zhaitan in 1326 AE, the Consortium discovered the island of Southsun Cove and provoked the territorial karka. Despite the incidents and unsafe living quarters, the shady corporation disguised the island as a peaceful resort to the recent Molten Alliance refugees with a contract. What the new settlers were not told was that those contracts also prevented leaving the island, thus forcing them to work. Job-o-Tron's main task was to interview and find useful employment to all the interested Norn and Charr as defined by Consortium standards whilst belitting them; the golem would also bully and berate the jobless. After the contracts indenturing the refugees were destroyed, the Golem realized that it was out of a job and had a bit of a breakdown. Activating its "tertiary objective", Job-o-Tron left the Consortium and the island of Southsun Cove in search of a new source of income, unbeknownst to any Consortium member.

Being a masterless, purposeless, and a "down on its luck golem", Hobo-Tron ended up in the streets of Kryta during the Queen's Jubilee in Divinity's Reach. There the machine met a fellow beggar: the minstrel Marcello DiGiacomo. The golem recorded and replayed the street performer's music in an effort to get some spare change by passing celebrants. Thus both buskers began competing for a corner, annoying the local Seraph. When the celebrations were coming to a close Scarlet Briar attacked the city and ordered her Aetherblade pirates to capture several citizens, including Hobo-Tron and Marcello. Inside Scarlet's Playhouse the pair were forced to perform the villianous Sylvari's musical theme over and over again in every area the Pact Commander and Scarlet battled. Whilst performing the minstrel begged to be released, whereas the amoral machine offered up its services as a hench-golem. When Scarlet was defeated and everyone liberated, however, the beggars' "collaboration" with Scarlet did not go unnoticed by the other hostages or by the Seraph. So both soon found themselves in front of a Divinity’s Reach tribunal for entertaining the villain who bombed the Queen’s celebration and turned Jenna’s watchknights into fearsome twisted monsters. While the pair avoided jail time, they were obliged to do charity work for Wintersday in order to work off their sentences. Changing into a festive attire and adopting the moniker 'Ho-ho-Tron', the golem, along with Marcello, was then forced to raise money via donations during Wintersday to help repair the damage to the city.

When Lion's Arch came under attack by Scarlet's forces, the golem fled to Vigil Keep, and using its Consortium medical database, willingly volunteered its services to Lionguard Healer Halloway as a backup medic, aptly taking up the name Heal-o-Tron. Analyzing the miasma, Heal-o-Tron was unable to find a cure for late-stage patients, but was able to analyze that it was counteracted by subaether harmonics in a localized energy field. Seraph Sergeant then arrived to apprehend the "fugitive golem", Despite the asuran construct denying any loyalty to Scarlet and trying to counter the Seraph's incorrect accusations, however, the golem's outstanding warrant for "aiding and abetting Scarlet" forced Heal-o-Tron's to evade arrest once more. Calculating that aiding in the assault against Scarlet would earn goodwill and prove disloyalty, Heal-o-Tron requested an energy amplifier and a combat chassis from Quartermaster Evon Gnashblade. However, with no funds to pay for the items and Evon's suspicions about the golem's intentions, Heal-o-Tron's request was denied. Heal-o-Tron accessed its "pleading subroutine" and explained its situation, seeing an opportunity to impress the Captain's Council of Lion's Arch. Evon eventually agreed and helped install the combat chassis.

Outfitted and ready for battle, Heal-o-Tron left for Lion's Arch, where it healed and aided the many soldiers and heroes such as Braham Eirsson, Rox, Marjory Delaqua, Kasmeer Meade, Ellen Kiel, and the Pact Commander in the battle against Scarlet's forces. Eventually they all boarded the Breachmaker and defeated Scarlet's Prime Hologram. A wounded Scarlet soon escaped to her control room, but the Pact Commander defeated Scarlet one final time. Ellen Kiel took notice of the golem's bravery and reassured it of its clear name, prompting Heal-o-Tron to question experiencing joy after completing such a difficult directive.

During the Festival of the Four Winds, Heal-o-Tron was recruited as an emergency relief worker by the Lionguard and gathered monetary donations inside the Crown Pavilion to aid in the effort to rebuild Lion's Arch after it was nearly destroyed during the massive battle. When a member of the Ministry Guard came to arrest the golem, Rox and Braham Eirsson came to its defense, calling it a "hero of Lion's Arch".

Some time later, after the destruction of the Pact fleet, Captain Ellen Kiel brought Heal-o-Tron to Captain Magnus in Fort Marriner to be his new aide and help in the reconstruction effort. Kiel introduced the golem to Magnus as a hero, prompting it to change its moniker to Hero-Tron. Magnus and Kiel declared Hero-Tron a free citizen of Lion's Arch, promising that it would no longer have to worry about the Seraph. Magnus then tasked Hero-Tron with helping new and returning citizens to get back to work, something the former Consortium recruitment golem was only too happy to do. However, moments later Hero-Tron was confronted by Evon Gnashblade, who had traced the golem's ID number back to the Consortium on Southsun Cove. Gnashblade used this information to blackmail Hero-Tron into spying on the Captain's Council for him.

With fundings from the Black Lion Trading Company and Consortium help, Lion's Arch was rebuilt into a new and glorious city, and Hero-Tron was once again tasked with helping citizens find useful employment, but this time it was under the command of the Captain's Council. Placing itself in Commodore's Quarter Hero-Tron was reunited with his ministrel "friend" Marcello and found ways to bicker with him via being unable to find him a fitting job position, or reporting the unlicensed performer. Hero-Tron offered to any new or returning passerby job pamphlets.

As refugees from Elona arrived on Lion's Arch, Hero-Tron can be seen conversing with Ogden Stonehealer about the golem's apparent independent thought and wishes to interview him. Hero-Tron agrees as long as his duties as an "official representative" of Lion's Arch do not interfere.

At some point, Hero-Tron joined Almorra Soulkeeper Vigil assault on a Death-Branded Shatterer in Jahai Bluffs. Under Almorra's instructions the golem would escort a concentrated bloodstone elemental. The heroic golem once again changed its name to Bait-o-Tron and was less than thrilled to do the job, nevertheless, it successfully lured the enemy when instructed and Almorra's party succeeded.

Escape from Scarlet's airship before the cannon fires! (80)

Sure, why not? Thanks.
(if working on Rebooting IG-6417 collection and with Module XD-356 in your inventory)

I am trying to repair a golem, but I want to make him into a hero like you. (Obtain Revised Module XD-356).

Thank you for your help. You are a true hero.

Not today, thank you.

I hope you run fast, then.