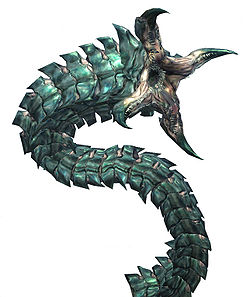 Wurms are giant worm-like creatures that bore through the ground. They are found throughout Tyria, the northern reaches of Elona, and even The Mists. Wurms tend to thrive most in locations of extreme temperatures, and are even able to live where most living beings could not, such as The Desolation. They also have a rapid reproduction rate.[1] Wurms' appearances tend to reflect their environment - taking on a plant-like appearance when living in heavy vegetation such as in the Maguuma Jungle, or a sand-toned appearance when living in deserts. While most wurms live underground, often near the surface, some live on the sea floor - and will often mimic the appearance of reefs in such cases.

The largest wurms are often given a moniker related to the word "maw" - such as Frostmaw - and are easily apex predators, able to make easy work of drake broodmothers and other large beasts.

Junundu Wurms are native to the sulfurous rivers of The Desolation. Females are always larger than males, with the largest dominant female being the Queen with her own harem of males inside her territory. According to historians, the undead king Palawa Joko commanded these wurms to patrol his kingdom, but the junundu’s inability to tunnel through solid rock limited their usefulness. However, the Mordant Crescent beastmasters are still using them for combat to this day.[2] In the past, they were used as mounts, and in some places like the Vehtendi Academy they still are. To ride a junundu, its rider has to be actually swallowed by it.[3]