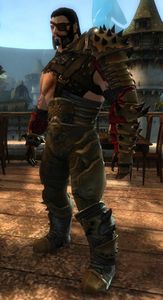 Today's a good day to be afraid. You have tomorrow and the rest of your life to be brave.

Captain Magnus "the Bloody-Handed" Irondawn is the norn captain of the Cormorant, and the current leader of the Lionguard. A member of the Captain's Council, he is responsible for protecting the merchants and enforcing the law in Lion's Arch. Before his current post, he was an adventurer who gained great fame for himself. Magnus lost his eye during the Battle for Lion's Arch. 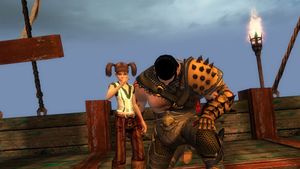 In the past, Magnus came across a shipwreck where he discovered the young human survivor, Ellen Kiel. He brought Ellen to Lion's Arch where she would grow up and eventually join the ranks of the Lionguard with him as her mentor.

In 1319 AE, Magnus was indirectly responsible for the formation of Destiny's Edge, and traveled with the guild to defeat Morgus Lethe, his former captain and a lieutenant of Zhaitan.

Section-stub. This key section of the article is incomplete. You can help the Guild Wars 2 Wiki by expanding it.
Reason: Expand biography with ambient dialogue lore reveals from Season 1.

In 1325 AE, Magnus led the defense of Lion's Arch against the karka, eventually invading Southsun Cove alongside the Lionguard to defeat the Ancient Karka which had been leading the karka attacks.

Following the rogue ex-Consortium member Canach's attempt to rile the karka and local wildlife to attack the Consortium, Ellen Kiel was sent to arrest him. Ellen, realizing that Canach had only wanted to free the settlers from the binding Consortium contracts, subtly helped him by rigging the Consortium ship carrying the deeds with explosives. By the time Magnus arrived at the scene, he lamented having to deal with Consortium complaints although he was happy that Canach was in custody, the Consortium had been humbled, and the settlers were happy. He also ordered Ellen to take a few days off and enjoy herself as he did not want to see her working all the time.

In 1326 AE, Magnus helped organize the Dragon Bash festival in Lion's Arch to celebrate Tyrians' resistance against the growing threat of the Elder Dragons. He hosted the opening ceremony while welcoming cultural representatives from various races to take part in the festivities. However, Captain Theo Ashford was assassinated during the effigy lighting ceremony which also claimed other lives. Furious at the deaths, Magnus wanted to find the culprit responsible for ruining the festival.

Prompted into action by the enigmatic spymaster E, Marjory Delaqua and the Pact Commander assisted Inspector Ellen Kiel in investigating the crime scene and interrogating witnesses. They eventually found out that the culprit was the seemingly benevolent onlooker Mai Trin who was revealed as the leader of cutthroat pirates known as the Aetherblades. However, they were unable to apprehend the exposed Mai who unleashed her minions on the party while escaping in the ensuing chaos. The Pact Commander and Ellen's Lionguard force eventually tracked down Mai Trin to the Aetherblade Retreat and captured her for interrogation.

With the Captain's Council in need of a new member after Theo Ashford's murder, Magnus put Ellen's name forward as a contender in the upcoming council election. He also commandeered a captured Aetherblade airship for Ellen, thus making her eligible. Ellen was able to gain the support of the council by securing a trade agreement with the Zephyr Sanctum, winning out over Evon Gnashblade of the Black Lion Trading Company. Her replacement on the Aetherblade investigation became Deputy Turma.

In 1327 AE, Magnus ignored warnings from Ellen and the Pact Commander about the sylvari terrorist Scarlet Briar intending to assault Lion's Arch with her alliances even after he had been made aware that Scarlet had been behind Mai Trin's actions. Magnus and the council defended their stance by stating that since the Aetherblades had already assaulted Lion's Arch and failed, they would not dare attack the city again even with more allies by their side.

Magnus soon realized that he had been wrong about Scarlet's tenacity, however, when her alliance assaulted the city with the combination of a mixed army and a devastating miasma. The attack led to many casualties as citizens of Lion's Arch either died to the invaders or the sickness that Scarlet was spreading.

Magnus, Ellen and the remaining Lionguard organized a counterattack alongside several adventurers to reclaim their lost city from Scarlet's forces. In the process of attempting to hold Fort Marriner, Magnus lost one of his eyes fighting a Molten Berserker, and was evacuated aboard Ellen's airship. He eventually learned that the Pact Commander had delivered the killing blow on Scarlet and congratulated the Commander for the deed as he began the lengthy rebuilding process in the ruined Lion's Arch.

Despite Lionguard ranks being thinned by Scarlet's assault, Magnus had to deal with an increasing number of smugglers and black market traders. Ellen kept reminding him to find a way to handle the smugglers at the port, and Magnus promised to do his best to settle the issue.[1]

In 1330 AE, a growing number of refugees from Elona appeared on Lion's Arch aboard ships. Magnus learned that they had been fleeing the destruction caused by the former god Balthazar's Forged invasion, and he tried to figure out where to shelter the refugees until the rest of the council would be made aware of the existence of the refugees and what to do with them.

Magnus welcomed the Pact Commander's assistance and wished them luck in the campaign against Balthazar. He also invited Sheriff Turma back to Lion's Arch to help with the refugee crisis. Turma, however, found out that Magnus and Ellen Kiel were not working with the full council, and she suspected the pair had their reasons to act behind the council's back although she could not be certain if those reasons were noble or selfish.

Magnus was seen defending various locations in Gendarran Fields from Palawa Joko's Awakened attackers alongside members of the Lionguard in 1330 AE. He prepared the defenses of Lion's Arch in case Joko attempted to open portals in the city, and assured worried onlookers that Lion's Arch would not fall to the lich king's army.

The Battle For Lion's Arch[edit]

Now this is a fight. I've spent too long in council meetings. Feels good...no, it feels right to raise a ruckus once in a while. Especially when it comes to your city.

We're gaining ground, but Scarlet's still alive on that drilling ship. Until we gut her, we're going to be in a stalemate.

How can I turn the tide?

Board Scarlet's airship somehow and end that crazy plant. How you do it...well, that's up to you. If it were me, I'd use a rusty blade and a low flame.

What can I do to help?

Board Scarlet's airship somehow and end that crazy plant. How you do it...well, that's up to you. If it were me, I'd use a rusty blade and a low flame.

We're gaining ground, but Scarlet's still alive on that drilling ship. Until we gut her, we're going to be in a stalemate.

Aggro
You have something for me?