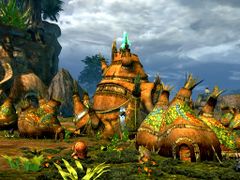 The Zintl Holy Grounds is the largest hylek village in Central Tyria and has a temple dedicated to the hylek god, Zintl, which it is named after. The original inhabitants were amber-skinned Ni-tlacua hylek,[1] which remain the most numerous, the village has taken on multiple other tribes, including the now near-extinct blue-skinned Bogotl,[2] an unnamed green-skinned tribe, and an unnamed red-skinned tribe, giving them sanctuary from the Risen that have ravaged their lands. The united hyleks are led by Calatl, Tlacela, and Necuamtal, each chieftains of their own tribes. Though most tribes each have a chieftain and a shaman, only one shaman, Huelec, resides in Zintl Holy Grounds and acts as shaman for all four tribes.[3]