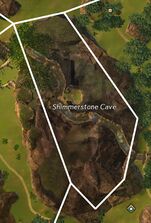 The Shimmerstone Cave is an area within Sparkfly Fen. Two separate caves make up this area. To the north there is a river carved tunnel that ends in a waterfall draining into the southern swamps of the Astrozintli Forelands which is inhabited by various wildlife. A rich platinum vein is also guarded by a Champion Risen Spider and her brood. To the south there is a smaller dead-end cave that is occupied by a troop of Nightmare Court.

Escort the injured hylek to the healing spring (59)