A chest is an environmental object that gives coin, equipment, crafting materials, and upgrade components. They are located throughout Tyria and come in different shapes and sizes. Normal chests can be found in fairly easy to reach places.

Rewards chests such as Splendid Chests are more difficult to reach and provide greater rewards. Boss chests often provide the greatest rewards and spawn after the completion of epic meta events that involve many players. Most jumping puzzles have a chest at the end as a reward. Players of any level can open a chest, but can be interrupted if attacked.

Prefixed chests are much less common than normal chests and provide higher value loot and a greater number of items. They will often contain upgrade components. These chests typically act as rewards for a multitude of activities including meta events, jumping puzzles, Explorer achievements, dungeons and Mini-dungeons, and so on. In general, these chests are found in harder to reach areas and specific requirements and provide greater rewards than normal chests. They also reset after a given amount of time, similar to their normal counterparts.

Not all chests are static chests found throughout the world. Whenever killing a creature yields loot of at least rare quality, a small Wooden Chest appears on the ground instead of the sparkling creature's body. A chest containing the Skritt Burglar can randomly appear in a number of locations all over Tyria.

For a complete list of the types of chests that exist in Tyria, see Category:Chests.

Boss chests provide up to 5 rewards of various quality. An example would be the Dragon Chest after the Shatterer and Tequatl the Sunless events. These contain one universal upgrade, jewels, and equipment. 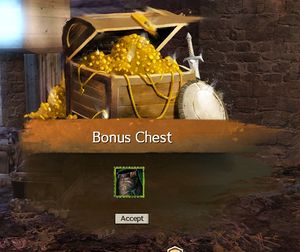 Players will receive a Bonus Chest after defeating a mega world boss.

After completing certain events, characters level 39 and above will receive a bonus chest, alternatively called bouncy chest,[1][2] with an item of rare or exotic quality, in addition to being able to loot a boss chest. These items will appear with a chest icon in the lower-right portion of your screen. For each event, your account can only receive one such bonus each day. The UI will display up to three unclaimed chests, including the ones from map completion or the daily. If a fourth bonus chest is earned while the first three float in the UI, it will appear after you claim the items from any of the first three. Any additional bonus chests beyond the fourth one will be automatically accepted into your inventory when you change map, exit the game or enter World vs World. Only 20 bonus chests can be in the queue; if a 21st chest enters the queue, chest contents will automatically enter your inventory.

Since the release of Heart of Thorns, most events also have bonus Event Rewards bouncy chest with normal rewards.