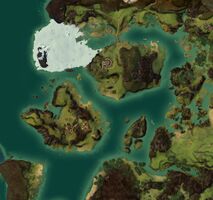 1 If supported by the Flame Legion

Entering the instance
<Character name>: Oh no. Not again.
Rox: Hey, Commander. Lookin' good.
<Character name>: Rox, what the—thank you, you too—what is going on here?
Rox: We were about to start talks when all of a sudden a bunch of soldiers came ripping through from Lion's Arch.
Rox: Sounds like Jormag tried to launch a sneak attack from the south. Lucky us, huh?
<Character name>: Can we expect reinforcements, or is it the four of us and a few Lionguard?
Rox: We sent word to anyone we could get a hold of. Hopefully they show up in time.
<Character name>: I'll take any help we can get. Where are the others?
Rox: On the shoreline—this way!

Entering the instance after it already started
Rox: Hey, Commander! We'll have to save the reunion for later. Jormag's trying to sneak an icebrood army into Lion's Arch!

Moving towards the shoreline
Crecia Stoneglow: We need to fortify our defenses! And why are there so many quaggans everywhere?
Malice Swordshadow: They live here, Crecia.
Rox: C'mon, Commander! Let's pitch in!

Crecia Stoneglow: Keep pushing back! If they get past us into Lion's Arch, it'll be a bloodbath!

Upon finishing the initial morale-booster event
Rox: That's a lot of icebrood. We making a dent at all?
Crecia Stoneglow: We haven't been overrun, so that's good at least.
Malice Swordshadow: And it looks like our reinforcements finally decided to show up.
One of the following:

Rox: Crecia actually managed to get some Exalted reinforcements! Their enchanted armor will help a lot!
Rox: The sylvari! They brought Fern Hounds! And plant turrets, too! Those'll help!
Rox: It's the asura! And they brought some of their power suits to help. Let's get in there and crack some ice!
Rox: It's our sandshifters! Get their backs—they'll summon up effigies we can use to smash the icebrood!
Rox: Never thought I'd say this, but I'm actually relieved to see Flame Legion. C'mon, let's help 'em out!

<Character name>: Right behind you.

After the defense starts
One of the following:

Malice Swordshadow: Commander, we need to make sure our allies are getting the support they need! They can't go this alone!
Crecia Stoneglow: Icebrood attacks are getting worse. We need to work harder—push 'em back!

On the third wave
Crecia Stoneglow: Rox, on behalf of the legions, I'd like to apologize. This isn't how I wanted to reintroduce ourselves.
Rox: I should've known things wouldn't go according to plan. You invited the commander, after all.
Malice Swordshadow: Yes, we should really stop doing that.
<Character name>: I'm right here, Imperator.
Rox: You know the Olmakhan won't shy away from a fight that needs fighting.
Crecia Stoneglow: We do.
Rox: Well, now you're fighting for the future of the charr. And we can't sit that out, no matter what our elders may think.
Malice Swordshadow: Couldn't have said it better myself. Welcome to the good fight.

After finishing defense
Crecia Stoneglow: We need to take out that big one before it reaches the shore.

Near the boss
Crecia Stoneglow: Damn thing's surrounded itself with ice walls! We need a way to blast through 'em! What do we have?
Rox: The cannons on that Lionguard ship and a positive attitude.
Malice Swordshadow: Heh. I like this one.
Crecia Stoneglow: Okay, stay on those cannons and blast away what you can!

After taking down the Corrupted Ice wall
Malice Swordshadow: That's the last ice wall down. Let's get back in there!

After defeating Tribune Splitwall
Rox: Everyone all right? Imperators?
Crecia Stoneglow: We're fine. Looks like they're pulling back. Thank you, Rox.
Rox: Like I said, Olmakhan can't sit this out. But there's something else.
Crecia Stoneglow: Oh? What's that?
Rox: Boticca's first thought was this might be another imperator vanity exercise, like Bangar's All-Legion Rally.
Rox: But the more I thought about it, and your moves over the last year... Malice, are you planning to become Khan-Ur?
Malice Swordshadow: I don't want it. Ash politics are the only kind I care about. I like equals to spy on. Makes things interesting.

Recruiting the Olmakhan was your idea?

Crecia Stoneglow: It's not really recruiting. I know Olmakhan take a dim view of the Flame Legion. And now they're back in the fold.
Crecia Stoneglow: The last thing I wanted was a rift between us. Flame's changed. The charr changed. I want them to see that.

You have my support. No matter what happens.

Optionally talking to Rox
Rox: Never a dull moment when you're around, Commander. Thanks for helping us out.

How's life with the Olmakhan?

Rox: Simple, y'know? Quiet. Nice. Frostbite loves it, too. Devourers don't usually get to retire.
Rox: Heard about some of the stuff that's happened since Dragonfall. Sometimes I miss it. Most times I don't.

Rox: I heard something about Primordus and the Spirits of the Wild. Figured I'd give him some space.
Rox: I'm proud of him, though. Last time we sent letters was...a year ago? He was changed. Even then.

Do you really think the Olmakhan will forgive the Flame Legion?

Rox: No. But then, that's the old Flame Legion. Everything I've heard about Efram is...not that.
Rox: They're fighting to save this world, and the Olmakhan will do the same. So we'll figure it out.

I'm glad you're happy. Thanks for helping us.

They were lucky you were here to help.

Malice Swordshadow: We all did our part. The reinforcements didn't hurt, either. As always, appreciate the extra paw.

What do you think about the Olmakhan?

Hopefully Lion's Arch can relax for a little bit now.