This article is about shadow-like creatures that originate from the Mists. For the darker side of the Dream called the Nightmare, see Dream of Dreams. For the fractal, see Nightmare Fractal. 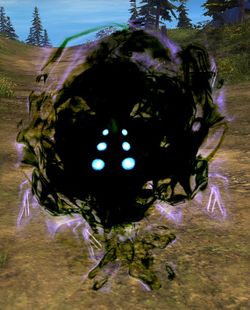 Nightmares[1] are evil spectral beings often associated with the Mists, often shadow-like in appearance. Their exact nature remains unclear, but they appear to be souls twisted into monstrous, animalistic forms[2][3] Most Nightmares appear to be natural inhabitants of the Mists, entering the world of Tyria where the boundaries between realms become weaker such as the Godslost Swamp or Statues to Grenth. Like demons, they appear to hate mortals and seek them out with only hostility.

Modern necromancers are capable of summoning and controlling Nightmares. Similarly, many have fallen under the employ of Dhuum, who twists souls into new Nightmares.

At least some Nightmares are rumored to have natural sound-dampening capabilities.[1]