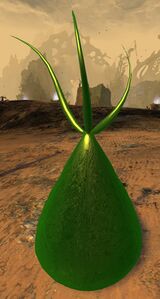 Champion Subject 6 is an ooze created by the Inquest found within the Thaumanova Reactor Fractal. Formerly an Asura Inquest Technician, he became an unwilling test subject to his superiors as the facility is approaching critical. After being turned into a champion ooze as part of the experiment, it breaks free from its containment pod and proceeds chase down and consume its "creator", before turning its attention against the Fractal Explorers. It guards the Cooling Rod necessary to disable the collider within the cooling chamber.