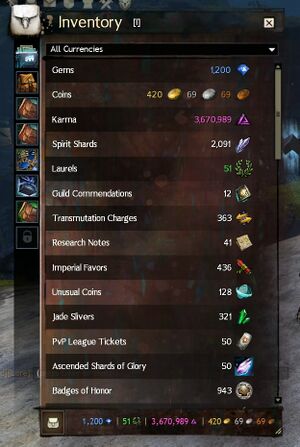 Screenshot of the wallet

Currencies are used to buy goods and services from vendors and other players. The lower bar of the inventory panel displays a varying amount of currencies and materials, based on and relevant to the location of the player, with coins always being included.

Account-based (displayed in the wallet)

Tokens are physical items that take up space in the inventory and are used to purchase items from certain vendors. Living World releases may include one or more types of tokens that are only available as drops for a limited time. Permanent tokens include Black Lion Claim Ticket Scraps that can be found in Black Lion Chests, and multi-use items, such as Karka Shells and Globs of Ectoplasm, used both as tokens and as crafting materials. 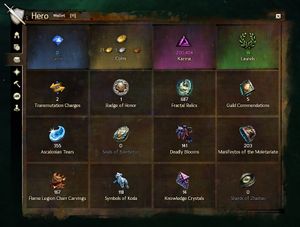 The first interface for the account wallet, missing several currencies.