Guild missions are weekly challenges for your guild. The currently available missions are listed in the Guild Missions tab of your guild panel. Select the mission you want to run and start it; you'll then have a limited amount of time to complete its objectives. If you fail, you can run it again at no cost. The first time your guild successfully completes a mission each week, it will award your guild favor. The first time you personally complete each mission in a week, you'll receive a personal reward.

The mission tab of the guild panel shows details of each mission available and those that are still locked. There are separate indicators for completion by both individual members (the small chest, closed if available, open if completed) and the guild (shield next to the chest, empty if available, filled with gold if completed).

"Mission Control" permission is required to launch (start) a mission. Select the mission you wish to launch then click the "Launch Mission" button on the bottom-center of the panel. Only one guild mission at a time may be active.

The mission will be automatically aborted if these steps 2, 3 and 4 are not carried out within a time limit.

Mission opportunities are unlocked as the guild level increases and may be separated into six categories: 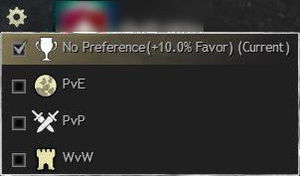 Guild Mission Preference may be viewed or changed prior to mission reset time by a guild member with the "Mission Control" privilege by clicking the white cog near the top-center of the missions tab of your guild panel. It is fixed for the entire week. All guilds with the same preference receive the same mission opportunities. There are four possible preferences:

Preference selection determines the first three types of opportunities (Easy, Medium and Hard). The remaining three categories (WvW, PvP and PvE) are populated with missions randomly drawn from among the Easy, Medium, and Hard missions for the appropriate category after they have been unlocked.

Missions reset weekly at Monday 07:30 UTC. A new set of mission opportunities is randomly selected based on a guild's preference. The guild may earn additional favor up to the weekly cap of 2000, which is reduced if the addition will exceed the total favor cap of 6000.

Guild Portal (object) in the guild hall provides a convenient way to gather participants prior to starting most guild missions and transport them to the nearest waypoint. It is recommended to join the same squad prior to activating the portal. Activation requires "Open Guild Portal" permission and Heart of Thorns expansion. However, using the portal after activation does not require the Heart of Thorns expansion.

There are three types of mission opportunities that may be placed into each of the six mission categories: WvW, PvP and PvE. Each of these opportunities has three difficulty levels: easy, medium and hard.

Both individual members and the guild may receive weekly rewards for each difficulty level in each of the six categories for a total of 10 weekly rewards (at Guild level 40: 3 Easy, 2 Medium, 2 Hard plus 1 each WvW, PvP and PvE).

Members who help successfully complete a mission while representing the guild, which has that mission active, will receive a popup reward chest on the lower-right side of their screen. Earning a mission reward marks that slot as awarded for all of the player's guilds.

Guilds receive favor for successfully completed missions. There is a 2000 favor weekly cap and a 6000 favor overall cap.

Personal and Guild rewards are determined by the difficulty of each successfully completed mission. The difficulty of the WvW, PvP and PvE opportunities is randomly selected each week.

Most guild missions require 3 or more representing members, but certain missions may be successfully completed by a single player. A Guild member with 'Mission Control' privilege must start the mission.

Completing some guild missions requires participating with another Guild, while representing your own guild(s) to receive guild credit.

Guilds may activate Guild World Events at a time of their choosing. The rewards are the same as the corresponding World boss event for all participants, guild member or not.

Bug:
A rewards chest may only be received by a few participants following successful completion of certain missions. For other guild missions, you may need to wait until the mission timer expires before receiving a reward chest.