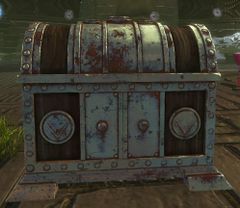 The Vigil Emissary Chest is a chest that can be found inside the Eye of the North next to the Vigil Emissary. The chest can only be looted once a week per account, and it resets weekly. Opening it requires 1 to 3

Blue Prophet Crystals. The chest will always ask for the highest amount of crystals the player can afford at the moment (up to 3). If a player has 2 crystals, it will ask for 2, and so on.

Section-stub. This key section of the article is incomplete. You can help the Guild Wars 2 Wiki by expanding it.
Reason: Missing dialogue with only one and two crystals in the wallet.

I should ask the emissary about this.

I should ask the emissary about this.