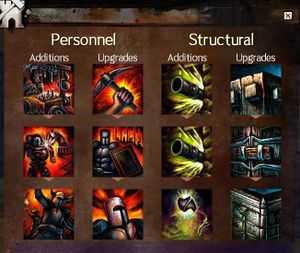 Formerly in World versus World, upgrades to improve defenses and add services could be purchased for the various objectives (resource camps, towers, keeps or Stonemist Castle), formerly called structures.

Any player can order an upgrade by talking to the Quartermaster, who is usually standing by the supply depot of that structure. The upgrades cost coin, supply and sometimes karma as well. Upgrades need to be made following a certain order, by tier.

Capture of a structure resets all upgrades, including any in progress.

The structure upgrades (Reinforce Walls, Reinforce Gates, Fortify Tower and Fortify Keep) may increase the health of gates or walls while also decreasing the damage caused by siege weapons. Initially, a gate has 410,000 health. A reinforced gate has 610,000 health (gates may not be fortified). Initially, a wall has 450,000 health. A reinforced wall has 676,000 health while a fortified wall has 833,000 health. The damage caused by siege weapons to both walls and gates is decreased 67% when reinforced and 75% when fortified, except that damage caused by flame rams is decreased 59% by reinforced gates. Therefore, once walls are fortified, attacks against gates using flame rams are more likely to be successful. If the health of a gate or wall is below the maximum due to damage then it may be repaired by any allied player using supply.