Order of the Crystal Bloom

Like Aurene, we focus on healing and restoration. The world needs stability. Order. 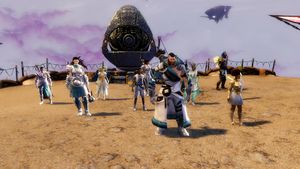 The Order of the Crystal Bloom is a newly made faction of people who have come to revere Aurene. It consists mostly of Elonians who had been saved by Aurene from the Branded, including Sunspears, the Zaishen Order, and Awakened. The Order also has individuals from all across Central Tyria who have heard of Aurene's deeds.

Formed in 1332 AE in the aftermath of the battle of Thunderhead Keep, the Order of the Crystal Bloom rallied behind Caithe, who had received Aurene's blessing, and looked up to her as their leader, forcing her into the position.[1][2] The members consisted of Elonians who had been saved by Aurene from the Branded, including Sunspears, the Zaishen Order, and Awakened, while also attracting individuals from all across Central Tyria who had heard of Aurene's deeds.

The Order worked alongside the Pact, Olmakhan and Mist Wardens to kill Kralkatorrik in the battle of Dragonfall. They witnessed Kralkatorrik's fall and Aurene's ascension into the Elder Dragon of Light.

After Aurene had made her new lair in Eye of the North in 1333 AE, members of the Order established a base there, taking it upon them to guard the place. Crystal Bloom Trainees of various races could be seen training in the Hall of Monuments while waiting for Aurene to call for their assistance. Several months after the awakening of Jormag, the Elder Dragon of Ice, another Elder Dragon, Primordus, began to stir. His forces, Destroyers, started attacking settlements around Tyria, and the Order of the Crystal Bloom was one of the first groups to come to aid them.