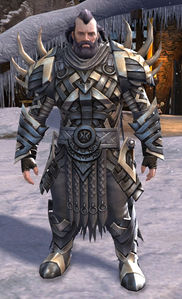 Knut Whitebear is an elder of the norn. The Great Lodge is his steading, and as the Master of the Lodge he is a defender of Hoelbrak, the settlement that has been erected around the lodge. The Great Lodge was founded by Asgeir Dragonrender, the hero who led the norn south from the ravages of Jormag and Whitebear's grandsire. Some might call him a leader of the norn, although in truth the concept of 'leadership' in norn society is poorly defined.

If attempting to sit on Knut's throne
In case your eyes are failing you, this fine chair is already occupied, stranger.

It would be rude to force the issue.

Greets
I hope this is important.
What do you need?
Hello, friend.
How can Hoelbrak's finest serve you?
Care and respect will serve you well here.