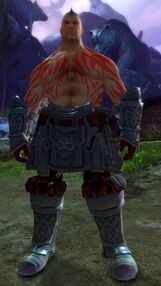 Get ready to travel, Slayer! I'm gonna send you through an asura gate—to Pain Town!

Mikkel Toivosson is the reigning champion of Hoelbrak's annual Big Brawl championship. He has beaten the Slayer of Issormir in the 1324 AE Big Brawl.