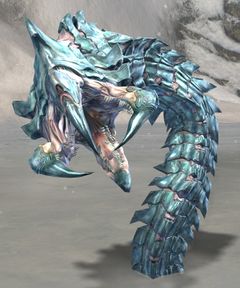 Issormir is a giant Ice Wurm which was captured by Knut Whitebear and Eir Stegalkin from Lostvyrm Cave. It is used as the main hunt for The Great Hunt in 1325 AE. It appears only after becoming enraged at the deaths of its hatchlings. After its death, Issormir's Body remains, frozen, as norn nearby figure out how to clean up the corpse.

After defeating Issormir, norn characters are referred to as the "Slayer of Issormir."

Section-stub. This key section of the article is incomplete. You can help the Guild Wars 2 Wiki by expanding it.
Reason: Skill names