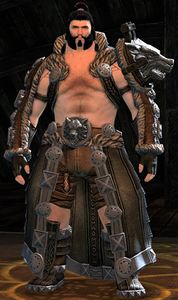 Sigfast is the youngest son of Knut Whitebear and Gaerta Whitebear, and leader of the Wolfborn together with his older brother Skarti. He spends his time at his homestead watching over children whose families are away hunting. He also has doubts about waiting for a hero to rise and break the Fang of the Serpent and believes the norn should march north and challenge the Elder Dragon Jormag directly.

Sigfast was born as the youngest son of Knut Whitebear and Gaerta Whitebear. He, his older brother Skarti Knutsson, Ingrid Wolfsdottir and about a dozen other norn worked together as a group in their youth, arrogantly believing they knew everything there was to know. As the years went by, however, they matured and grew alongside Hoelbrak itself as more norn moved into the great settlement. Their close-knit group gradually turned into peacekeepers around the settlement, and they accepted in new members as their workload grew, forming the Wolfborn led by Skarti and Sigfast.[1]

Knut ordered Skarti and Sigfast to postpone their hunts and stay in Hoelbrak for the months preceding the Great Hunt of 1325 AE.[2] During his stay, Sigfast took care of young norn at his steading while the youths' parents were out hunting.[3]

Sigfast eventually participated in the Great Hunt and witnessed one of the norn participants defeat the great ice wurm Issormir and earn the title Slayer of Issormir. He spoke with the Slayer later, expressing his regret at being forced to stay in Hoelbrak to guard it when he would have wanted to leave to fight against the Elder Dragon Jormag's minions. He also pointed out that the norn had become stagnant while Knut wished to wait for the prophesied hero to crack the Fang of the Serpent. Sigfast admitted that he had only spoken about his feelings to Skarti and the Slayer and revealed that he was jealous of the Slayer's freedom to travel where they wished.

During this time, rumors began spreading that Skarti was torn between Knut and Sigfast over something secretive.[4] When talking with the Slayer, Skarti revealed that Sigfast had been hearing more rumblings around Hoelbrak about the Whitebears being too cowardly because they had chosen to wait for a hero to break the tooth instead of going off to fight the Ice Dragon. According to Skarti's explanation, Sigfast wanted to silence that talk before the norn became divided over the matter whereas Skarti believed it was just harmless talk from too much ale. Although he viewed his brother as both brave and loyal, Skarti could not help but admit that some of Sigfast's ideas were not to his liking.[5]

Later that year, Sigfast attended the party at Legate Minister Caudecus Beetlestone's manor as the norn's representative to celebrate the armistice between charr and humans. While socializing, he met with the future Pact Commander who was also attending the festivities. Spending most of the party drunk, he was not impressed by the minister's ale and felt that Kryta had too warm a climate for his tastes. He also noted odd behavior from the inventor Uzolan, one of the guests, alerting the Commander that something suspicious might have been going on at the party.

When the Separatists invaded the party with a customized golem and Uzolan revealed his true allegiance, Sigfast was eager to battle the golem. However, the golem used a teleportation ray on him, Queen Jennah, and the charr's representative Mia Kindleshot. Shortly after the teleportation, the Separatists intended to give Sigfast two drops to keep him sated but instead witnessed him grabbing the whole bottle and drinking it in a single swallow, which made the norn pass out and made it more difficult for his kidnappers to move him to another location.

A rescue party consisting of adventurers who included the Pact Commander, Logan Thackeray and Zojja eventually located Sigfast and saved him from the Separatists. As they woke the drunken norn up, Sigfast was able to tell them that the kidnappers had taken Jennah and Mia deeper into the passage underneath the manor. He returned to the garden to tell the other guests what had happened. Sigfast eventually learned that the group had been able to save the prisoners and defeat the Separatists.

Sigfast was seen defending various locations in Wayfarer Foothills from Awakened attackers alongside members of the Wolfborn in 1330 AE.

As news spread about both Jormag's latest movements and the increasing activity of Primordus's destroyers in 1333 AE, Sigfast traveled to the Eye of the North to exchange ideas with other races' representatives.

While conversing with the Pact Commander, Sigfast pointed out that he had grown tired of fighting wurms and Awakened and wanted to battle Jormag. He admitted that he had not met with Braham Eirsson for some time; however, he had learned about Braham's role as the norn of prophecy and was certain that Eir Stegalkin would be proud of how far Braham had come.

Hey, have you heard? Hoelbrak is safer than ever, Skarti has too much to do, and my father think a Spirits-promised hero will smash the tooth any day now.
(If norn)

Is that sarcasm I'm hearing? Or disappointment?

A bit of both, I suppose. Lately it feels like we've become a stagnant pool-just waiting, waiting, and more waiting.

Have you spoken these feelings to anyone else?

Just my brother and you.

You're not the first to express it to me.

I know there are many who feel the same. I've seen many hunters leave to go fight the dragon's minions. I can't go, but sometimes I wish I could.

You will be with me in spirit, if not in body. One day, perhaps you'll join me.

You honor me, <Character name>. I will listen on the wind for your legend to come flowing back to me.

I won't disappoint you.

All spirits have their own roles. You have yours here.

And yours is out there, fighting the Elder Dragons. I would be lying if I said I didn't envy you.

You and all of Hoelbrak go with me, in my heart. (Same as Charm answer)

Do not undervalue your duties. You protect our homeland!

Yes, it is true. Someone must stay behind and guard your backs, so that you have a home to return to one day.

Fear not. We all fight the same enemy. (Same as Charm answer)

What about the Sons of Svanir?

They're minor trouble. I worry more about the Elder Dragon they worship. It has incredible power.
(If norn)

But in Hoelbrak? Why aren't the Svanir kicked out?

They deserve a chance, like anyone else. We wait until they stray from the path, then we whip them into line or toss them into the cold.

Power can be seductive.

I have to be going, actually.

Fighting wurms and Awakened gets old after a while. I'm ready to punch Jormag square in the face. Time to end that legend.

Have you met with Braham?

Not in a long time. Prophecy or not, he's worthy of his name, though. He cracked Jormag's tooth. His mother would have been proud of how far he's come.

He'd be happy to hear that.

On Hoelbrak
Carry on.
May the hunt sustain you.
Don't loiter.
Let me know if you see anything suspicious.
The Wolfborn have their eyes on you.