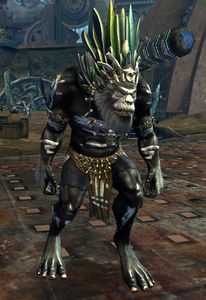 Gara is a grawl shaman whose village is being terrorized by a false god. The player can rescue him in Doubt, involving norn, charr, or asura characters who have chosen to help the grawl. Gara and his grawl will then participate in future battles against the dragon's minions.

After helping Gara, you will find him and some of his grawl in your home instance.