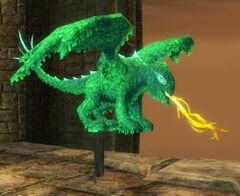 Blue, green, red and lilac Dragon Piñatas can be found in large numbers throughout Hoelbrak, and in smaller numbers in other major cities, during Dragon Bash. One can also be permanently added to the home instance by purchasing a Commemorative Dragon Piñata.

Breaking them will reward players with some

Pieces of Zhaitaffy. The piñatas are independent between instances: they will naturally respawn after a couple hours or so, but moving to a new IP will effectively respawn them instantly. After 35 piñatas per account per day, piñatas gives only 1