From Guild Wars 2 Wiki
Jump to navigationJump to search
Stub. Key elements of this npc article are incomplete. You can help the Guild Wars 2 Wiki by expanding it.
Reason: Missing alternate appearance from The Crystal Dragon instance and possibly some locations in Black Citadel and elsewhere. 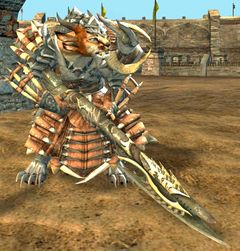 In The Command Core
That's far enough. These are the Imperator's personal quarters. No one is allowed in without the express permission of Smodur himself. And you don't have it.

At Delegation of the Legions
I'm not sure about the humans, but asuran tech could come in useful against the Elder Dragons. I should talk to a few of those brainy runts when I get the chance.

At Severed Breach
You don't happen to know if they're about to fire the cannons, do you?

The long range[sic] artillery they have here. I like all the paw-to-paw fighting we get to do whenever the Flame Legion attacks our encampment, but I'm not really a fan of the big guns.

When you fight up close, you know when you've done well. You can count the enemy bodies on the ground. But the cannons...a loud boom, then nothing. For all we know, we're wiping out a raccoon platoon.

I'm sure your legionnaires know what they're doing.

Sorry, I just got here. Good-bye.

At Sati Passage
Hey, you. Have you seen my dolyak? About shoulder high. Cute as a button. Answers to the name "Honey Haunches"?

I haven't seen any dolyak wandering around.

It's not like her to be out this late. Judging from that delicious smell wafting through the air, it's almost time for dinner.

I hope you two will be reunited soon.

Sorry, I'm too busy to help search for a lost pet.

At Town of Cowlfang's Star
Cowlfang's Star is under the command of Legionnaire Groma Spinebreaker. Speak with her if you have any questions.

In Martyr's Woods, during Drive the Ascalonian ghosts from Spirit Hunter Camp
I can't believe Spirithunter Camp[verification requested] has fallen to that bunch of pasty-faced Ascalonians. But now comes the part where we take it back.

At Spirit Hunter Camp, during Scout the Abbey Ruins with the Bane Warband
The Bane warband's out on patrol in the Abbey Ruins. Not the kind of place you'd want to be after dark. I bet they wouldn't mind a little back-up.

I've got other plans.

Greets
The wheel of progress turns.
What's on your mind?
What do you want?

During Scout the Abbey Ruins with the Bane Warband
Hey! Over here!