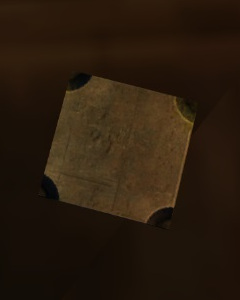 The Datapad contains Mechanist Ninn's report on the invading Awakened.

Following up on the destruction of stolen portal systems, agents have reported critically decreased but nonzero continued attacks by Awakened forces. Further investigation corroborated these reports; the Awakened arrive via unstable portals in a reduced regular cadence.

Comparisons against archived golem scans indicate that the Awakened observed have significant degradation consistent with extraplanar overexposure. Left unopposed, they degenerate after a period of minutes into undifferentiated material.

Site research on a previously unattacked location allowed recovery of non-Awakened material from the original portal systems. Analysis (see attached data) lead to the following conclusions: the observed Awakened forces were those in transit immediately prior to the facility's destruction.

The collapse of portal integrity, in the abscence[sic] of a stable endpoint, caused a phenomena inversion, obliterating the Awakened and trapping their remnants in an interstitial state. See related studies attached [clearance check].

The current attacks are created by this Mist-based repetition phenomenon, similar to the research submitted by [clearance check]. The attacks do not represent a new strategy on the part of Awakened command and do not pose tactical or political challenge to existing Peacemaker forces in their areas. The repetition phenomenon will decay until attacks case in approximately [clearance check] years.

This datapad must have been left here by Mechanist Ninn.